Civilians in rebel-held eastern Aleppo are expressing desperation over their survival as fighting between the government and the opposition carves deeper into their half of the city.

The Syrian Civil Defence, a volunteer rescue group also known as the White Helmets, said at least 45 people, mostly women and children, were killed and more than 50 injured in Jibb al-Qubba on Wednesday by the regime’s artillery shelling on those fleeing the conflict.

The Red Cross (ICRC), operating on the ground, said at least 20,000 civilians have fled their homes in the past 72 hours, with some making it to shelters in the regime-held western half of the city. Others, it said, are retreating into other neighbourhoods in the east.

Earlier this month, Syrian President Bashar al-Assad’s forces intensified their push for control over eastern Aleppo. They have reportedly captured a third of the area in what residents describe as an unrelenting ground and air campaign.

The city, which was once Syria’s largest, has been divided between government and opposition control since 2012.

The UN reports that at least 250,000 civilians remain under siege in the eastern part of Aleppo. For months, they have faced severe shortages of basic supplies, including food, water and fuel, in addition to constant bombardment.

A network of activists across Syria, the Local Coordination Committees, said that a total of 100 Syrians were killed on Monday and Tuesday in Aleppo, as the government and its ally, Russia, close in on the neighbourhoods of al-Myassar, Bab al-Nairab, al-Salheen and Sha’ar in the east.

On Tuesday, France’s ambassador to the UN, Francois Delattre, warned of the dire situation, saying: “France and its partners cannot remain silent in the face of what could be one of the biggest massacres of [a] civilian population since World War II.”

With fighting edging closer to their homes, many civilians have sought refuge in two main shelters, Jibreen and Mahalej, set up by the ICRC and the Syrian Arab Red Crescent (SARC) in the west of the city.

“Local authorities and humanitarian organisations do everything possible to help but the conditions are very dire, as we are talking about some 20,000 people fleeing into these places,” Pawel Krzysiek, the ICRC’s communication coordinator, said.

“They are safe, though many of them are exhausted and traumatised by the journey, danger, [and] emotions of having to leave everything behind.”

But as the situation descends into chaos and confusion, Taleb said she and her family are apprehensive to move into areas under government control.

“We’re hearing different things. Some people are saying the men who leave are being killed, but the women are left alone. Others are saying they are safe in Jibreen. Some have left but we haven’t heard back from them.”

Ibrahim al-Hajj, head of media for the White Helmets’ Aleppo branch, told Al Jazeera the ones fleeing the area were being attacked.

“The shelling is not slowing down. There are people under the rubble. The situation is catastrophic.”

Approximately 400,000 Syrians have been killed in the conflict that dates back to a 2011 popular uprising against Assad’s regime, according to the UN.

“Please help us. We want anyone to intervene and stop this,” Hajj said. 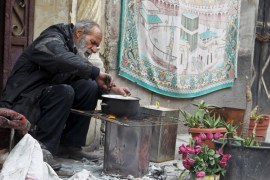 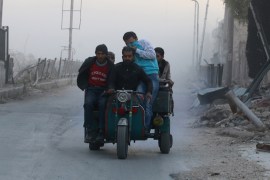