The Syrian army and its allies announced the capture of a large swath of eastern Aleppo from rebels in an accelerating attack that threatens to crush the opposition in its most important urban stronghold.

The army captured the Sakhour, Haydariya and Sheikh Khodr neighbourhoods on Monday, while Kurdish forces took the Sheikh Fares district from rebels, the UK-based Syrian Observatory for Human Rights said.

Rebels have lost most of the northern neighbourhoods in besieged east Aleppo, it added, as the army pushed an offensive to retake the whole of Syria’s second city.

Kurdish forces in Aleppo are not officially allied with Bashar al-Assad’s government in Damascus, but the opposition regards them as cooperating with the government in an effort to recapture the city.

“The rebels have lost control of all the neighbourhoods in the north of east Aleppo, and this is their worst defeat since they seized half the city in 2012,” said Observatory director Rami Abdel Rahman.

Syrian state news agency SANA reported the capture of Haydariya and Sakhour as it looped footage showing some of the thousands of civilians who have fled east Aleppo in recent days as loyalist troops have advanced.

The army renewed an operation to retake eastern Aleppo nearly two weeks ago, hoping to deal the opposition a potentially devastating blow.

“Yesterday was the worst day we’ve witnessed since the war started. More than 1,500 families have fled to the regime-controlled west of the city. The bombing is horrific,” Ibrahim Abu Leith, Aleppo-based spokesman for the Civil Defence, told Al Jazeera.

The city, which was Syria’s biggest before the start of a civil war that has killed hundreds of thousands of people, is divided between the government-held west and rebel-held east, where UN officials say at least 250,000 people remain under siege.

Al Jazeera’s Osama Bin Javaid, reporting from Gaziantep on the Turkey-Syria border, said the condition on the ground was “very fluid”.

“There has been a lot of displacement in many directions from various neighbourhoods,” he said.

“Thousands have left to get away from the frontline. People close to the advancing government forces and Kurdish fighters have opted to go to them. But the bulk of the movement has been towards the central parts of besieged Aleppo, towards areas held by the rebels.”

Rebels in Aleppo have lost at least 30 percent of the besieged east since Saturday, as frontlines continued to cave in after nearly five months of siege.

Drone footage released on Monday by SANA shows an ariel view of east Aleppo’s Jabal Badro neighbourhood after it was retaken over the weekend by pro-government forces.

Syria’s Al-Watan daily, which is close to the government, said the army was advancing quickly.

It said the next stage of the operation would be “to divide the remaining area into security districts that will be easily controlled and to capture them successively”.

The advance would then “push the gunmen to turn themselves [in] … or accept national reconciliation under the terms of the Syrian state”.

East Aleppo-based journalist Zouhir al-Shimale told Al Jazeera that there was a “constant collapse” as rebel-held neighbourhoods continue to fall to government forces.

Civilians besieged for months in the east have faced serious food and fuel shortages.

The Observatory, which relies on a network of informants in the country to monitor the war, said that nearly 10,000 civilians had fled east Aleppo overnight on Saturday – at least 6,000 to the Kurdish-controlled northern district of Sheikh Maksoud, with the rest fleeing to government-held areas.

“It is the first exodus of this kind from east Aleppo since 2012,” Abdel Rahman said, calling it the “biggest defeat” for the rebels in Aleppo since then. 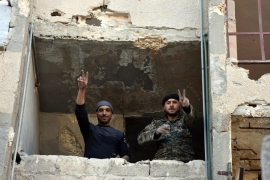 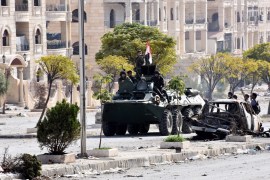 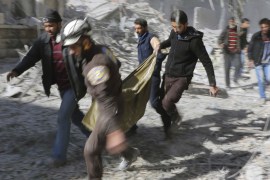