A suspect has been shot dead by police following an hours-long lockdown on the Ohio State University campus that left eight people injured.

The university went into lockdown on Monday morning when the attacker, identified as Abdul Razak Ali Artan, drove into a crowd at the university.

Officials confirmed Artan, 18, was a permanent and legal US resident and a student at the university.

Ohio State police said the attacker purposely drove over a kerb and into pedestrians before getting out of the vehicle and stabbing people with a butcher’s knife.

“He exited the vehicle, and used a butcher knife to start cutting pedestrians,” said Craig Stone, chief of police at the university.

Ben Johnson, a spokesman for the Ohio State University, also confirmed the suspect was shot dead, before adding that injuries in the attack included stab wounds and being struck by a vehicle.

UPDATE 1/2 : Shelter in Place lifted. Scene is now secure. ALL classes are canceled on Columbus campus for the remainder of the day.

Earlier, the university’s website warned students there was a gunman on the campus and they should “run, hide, fight”.

“Run, hide, fight” is standard protocol for active shooter situations. It means: Run, evacuate if possible; Hide, get silently out of view; or Fight, as a last resort, take action to disrupt or incapacitate the shooter, if your life is in imminent danger.

The university in Columbus followed up with another tweet that said: “Continue to shelter in place in north campus area.”

One was in critical condition, and the rest were stable, she said.

A student, Joseph Noll, said he heard a fire alarm, but no shooting, and also said a car had driven into the crowd.

“I was right there, and there was no one shot,” he told WBNS, a local Columbus TV station.

“Someone did run over a crowd of people with a car. I just heard some screams, and I saw people running. And everyone just fled the scene immediately.”

Ohio State is one of the largest universities in the US, with roughly 60,000 students on the main campus in Columbus, which sprawls across more than 770 hectares. 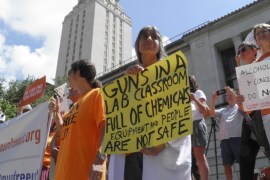 Critics worry that new “campus carry” law will cause self-censorship and put students and faculty at risk. 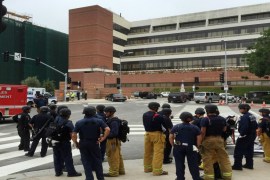 Professor killed in shooting in UCLA in Los Angeles

Mechanical engineering professor identified as victim of murder-suicide which led to cancellation of classes in UCLA.