Jerusalem – A Palestinian member of the Israeli Knesset has accused Benjamin Netanyahu of seeking to achieve “political gains out of an unfortunate state of events”.

The accusation came in response to to a barrage of statements by the Israeli prime minister and members of his coalition blaming Israel’s Arab minority for the fires that have swept across the country since Tuesday.

“The Israeli ministers not only blamed Palestinians for igniting the fires, but Mr Netanyahu, the prime minister, and Aryeh Deri, the internal affairs minister, suggested revoking the citizenship of anyone who lit fires,” said Jamal Zahalka, a Knesset member of the Joint List, a coalition of Arab Palestinian political parties and leader of the Balad faction.

“They were targeting Palestinians of course. They didn’t suggest that for those who burned the Dawabsheh family one year ago.”

Netanyahu indicated on Thursday that he would work to strip residency from anyone found guilty of “terrorism”, saying that some of the fires were the handiwork of “elements with great hostility towards Israel”.

There are 1.7million Palestinian citizens of Israel who already suffer rampant and institutionalised discrimination.

“He [Netanyahu] is trying to get cheap popularity on the Israeli street by inciting against Palestinians and Arabs,” said Zahalka.

“Also, he wanted to change the headlines in the Israeli media. People started saying that he didn’t prepare the Israeli fire forces and prepare what was needed to fight the fires. It was his failure.”

Since Tuesday, strong winds and dry weather have fuelled hundreds of fires across Israel and the occupied Palestinian territory.

Tens of thousands of residents were allowed to return to their homes in Haifa on Friday after being evacuated on Thursday, but fires raged around Jerusalem, northern parts of the country and parts of the occupied West Bank into Friday night.

In Nataf, West of Jerusalem, residents were evacuated on Friday as fire crews struggled to contain the blaze. Israeli fire crews received air support from Cyprus, France, England, Greece, Turkey, Italy, Russia and the US, according to Micky Rosenfeld, Israeli police spokesperson.

Palestinian firefighters assisted Israeli crews in the efforts on the ground and the flames were pushed back by night.

Forty Palestinian firefighters travelled to Jerusalem on Thursday night after the Palestinian Authority offered to assist in efforts to contain the spread of the fires.

After the fires in Haifa were contained, Palestinian crews travelled to Jerusalem, said Nael Azzeh, spokesperson for the Palestinian Civil Defence.

“For the firefighters working in Haifa and Jerusalem, they worked for 24 hours without a minute of rest,” Azzeh told Al Jazeera.

“It’s the same for the firefighters in the West Bank as well.”

Azzeh said more than 100 fires broke out across the West Bank on Friday, including 57 forest fires, and that more than 500 volunteers had taken part in operations alongside 600 regular firefighters since the crisis started.

Rosenfeld told Al Jazeera that “12 people had been arrested in connection with the fires” in recent days, without elaborating further on individual cases.

Israeli politicians blamed the fires on what they call “nationalist terrorists”.

Gilad Erdan, Israel’s minister for public security, said that those arrested in connection with the fires were “minorities”, referring to Palestinians or Arab citizens of Israel.

Erdan told Israel’s Army Radio that there was likely a nationalistic motive to any cases of arson.

A view that was echoed by Naftali Bennett, education minister, and leader of the settler party Jewish Home, who blamed the fired on “nationalist terrorists”, adding that the fires could not have been started by Jews.

Zahalka warned that the “dangerous” rhetoric coming from the Israeli ministers could spark attacks against the minority Palestinian community in Israel, and accused ministers of “adding fuel to the fire”.

Meanwhile, Palestinian media agency Wafa reported that a fire that broke out near the Palestinian town of Huwwara in the occupied West Bank on Thursday was allegedly carried out by Israeli settlers from Yitzhar.

Ghassan Daghlas, an official who monitors settlement activity in the West Bank, told Al Jazeera the fire had destroyed olive trees in Huwarra but he could not confirm how it had started. 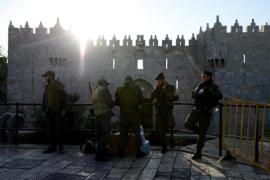 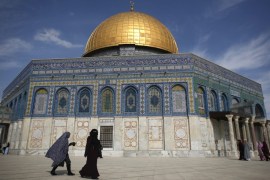