At least 39 people, including five children, have been killed in the latest round of air strikes and shelling in and around the Syrian city of Aleppo, Al Jazeera has learnt.

Both Syria and Russia have denied involvement in the bombardments.

The International Committee of the Red Cross said fuel is critically low in the besieged city, as residents faced a harsh winter without heating and electricity, and escalating food prices.

Some residents said meat now costs $50 per kilo, compared to $9 four months ago.

“Since the early [Saturday] morning, Russian warplanes attacked the city. Many people were killed. In the last 10 days in this campaign, more than 500 people have been killed by Russian air strikes and ballistic missiles,” he told Al Jazeera.

“All the hospitals in the city are out of service. So the injured are a risk as there is only limited medical aid available. The situation is becoming worse every day. Food supplies have almost dried up. All stores are closed. Some people sell vegetables that they grow in their garden. Other food is no longer available.”

On Friday, Raed al-Saleh, the head of the Syria Civil Defence, or White Helmets, said the inhabitants of east Aleppo have fewer than 10 days to receive aid or face starvation and death from a lack of medical supplies.

Anti-government fighters in east Aleppo have agreed to a plan for aid deliveries and medical evacuations, according to UN officials, but the global body is awaiting a “green light” from Russia and the Syrian government before it can begin operations.

Jan Egeland, the head of a UN-backed humanitarian task force for Syria, said on Thursday that his team had received written approval from the fighters and “verbal support” from Russia for the UN plan reached earlier this month.

The four-point plan involves the supply of medical and food aid, the evacuation of 200 wounded or disabled civilians, and medical staff to rotate in and out of besieged areas. 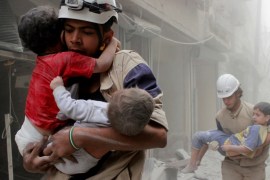 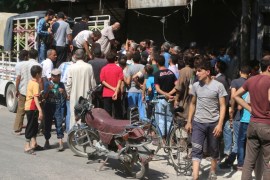 Syrian rebels agree to aid deliveries to east Aleppo, UN says, but no official confirmation yet from Russia or Syria.