Doha, Qatar – A province in Pakistan has passed a new law, with provision for life sentence, against forced religious conversions following criticism over protection of minorities in the country.

The new bill, passed by legislators in Sindh on Thursday, mandates a 21-day period for adults to consider their decision to convert and forbids minors from choosing another religion of their free will.

“Forced conversion is an abhorrent and violent offence and an issue that has become prevalent across Sindh [that] must be eliminated by recognising the importance of tolerance, peace and respect for all religions and persons, irrespective of their religion,” reads the bill, a copy which was obtained by Al Jazeera.

“It is necessary to criminalise forced conversions and provide protection for those who are victims of this abhorrent practice.”

The Sindh Criminal Law (Protection of Minorities) Bill was proposed a year ago by Nand Kumar Goklani, a legislator of the Pakistan Muslim League – Functional, who belongs to the minority Hindu community.

Sindh’s legislature is the first assembly in Pakistan to pass such a law.

“Every person has the right to practise their religion and beliefs,” Goklani told Al Jazeera on Friday by phone from Karachi, the main city of Sindh.

“We now have a law to help stop this practice. It is a historical move.”

Gorklani said the legislation calls for a minimum sentence of five years and maximum of life imprisonment for anyone found to be forcing people to convert.

Forced conversion has long been an issue in Pakistan, a Muslim-majority country of nearly 200 million people.

Although there are no confirmed statistics on forced conversions in the country, the Movement for Solidarity and Peace in Pakistan, an NGO, estimates that at least 1,000 girls or women are forced into Muslim marriages and made to convert to Islam annually.

A case in point is that of Anjali Kumari Meghwar, of Mustafa Abad Mohalla, in Sukkur district of Sindh, who was allegedly kidnapped and “forced” to marry a Muslim man and convert to Islam in 2014.

According to local media reports, Anjali was not a minor and she had eloped with Riaz Sial, the man accused by her family of kidnapping her.

Anjali’s father, Kundan Meghwar, says she is now in a shelter home in Karachi as the court case is still ongoing.

“My daughter Anjali was 12 years old when she was kidnapped.” he told Al Jazeera by phone from Karachi on Friday. “That makes her a minor, so she cannot marry or choose a religion for herself.”

Meghwar says that the new law is a “ray of hope” for non-Muslim communities of Pakistan and will put a stop to “injustice against the minorities”.

“We have the law on our side now, so hopefully, others will not experience what I have been through,” he said.

The new law states that the victim may file a petition regarding forced conversion in a local court and that “the court shall fix the first date of hearing, which shall not exceed seven days from the date of the receipt of the petition by the court”.

“It took a lot of effort to get this bill passed, and I am very happy that we finally made it possible,” Goklani told Al Jazeera.

“Everyone has the right to feel protected and openly practise their faith.” 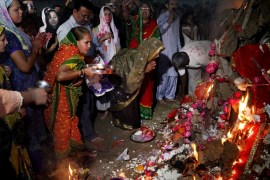 Hindu festival of colour kicks off in Pakistan

For the first time, parts of the Muslim-majority country declared a public holiday to mark the Hindu Holi festival. 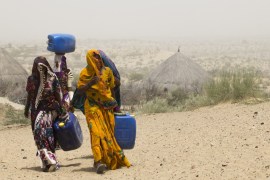 Children are dying at an alarming rate here but underneath the numbers lie tales of a region neglected and in ruins.