At least nine civilians were killed, and nine injured, in Pakistan-administered Kashmir when an Indian artillery shell hit a passsenger bus in the disputed region on Wednesday, Pakistani officials said.

“The passenger bus was attacked by Indian shelling at 8:30 in the morning [03:30 GMT], resulting in the death of nine people onboard,” Deputy Police Commissioner of the Neelum Valley Sardar Abdul Waheed told Al Jazeera.

“The ambulance heading to the site came under attack as well, and locals arranged transportation for those injured, taking them to the hospital in private cars.”

According to the police, the bus was heading towards Muzaffarabad from Kel when it came under attack.

“The injured and death toll may increase, we are still waiting for the heavy shelling to stop in order to start rescues, We are not able to pick up injured or other person from the area,” Waheed told Al Jazeera.

Waheed said that heavy shelling occured in the Neelum, Punch and Kotlia districts.

“We were coming from Shadara to Muzafarabad. When we got to the Nawal sector there was firing from Indian [checkpoints],” the the bus driver, Gulfham Ahmed told Al Jazeera from his hospital bed.

“First the small firing and then the rocket launcher hit [the vehicle] and passengers were injured. I accelrated as fast as I could away from them. As soon as I could… I pulled the vehicle over and people pulled us out.”

Indian officials did not comment on the deaths, but a military spokesperson said the Pakistan army initiated “indiscriminate” firing on Wednesday morning on Indian army posts in the Bhimber Gali, Krishna Ghati and Nawshera sectors.

Muzamal Brandy, who was driving behind the bus when it came under fire, said a “rain of bullets” hit the vehicle before a rocket slammed into it.

“The bus kept moving – it didn’t stop. We saw people dead inside the bus,” he said.

The incident comes a day after India said three of its soldiers had been killed by Pakistani troops and threatened “retribution”.

Pakistan and India have been trading fire recently in the Himalayan region, which is divided between the two nuclear-armed neighbours and claimed by both in its entirety.

Tension has escalated since September, when armed fighters attacked an Indian army base in Kashmir, killing 19 Indian solidiers.

The countries have fought two of their three wars over the region since partition and independence from Britain in 1947. 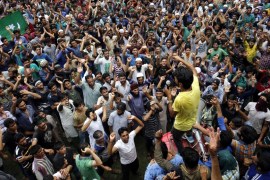 At least 20 injured in unrest between protesters and Indian troops, as death toll since last month rises to 63.