Colombia’s government has signed a revised peace agreement with the armed group FARC aiming to end half a century of hostilities, nearly two months after the rejection of the original deal in a referendum.

President Juan Manuel Santos and FARC leader Rodrigo “Timochenko” Londono signed the 310-page accord on Thursday at the Colon Theatre in the capital Bogota.

“We can turn the page on violence,” Santos said after the signing, while praising the “persistence” of the negotiators to reach a “better” agreement.

For his part, rebel leader Londono said: “The word should be the only weapon in Colombia,” adding that the new deal took into account “the concerns made by many sectors” of society.

The two men shook hands amid loud cheers from the audience.

The hastily organised ceremony was a far more modest and sombre event than the one in September in the city of Cartagena, where the two leaders had signed an accord in front of an audience of foreign leaders and United Nations Secretary-General Ban Ki-Moon.

They range from a prohibition on foreign magistrates judging crimes by the FARC or government, to a commitment from the armed fighters to forfeit assets, some of them amassed through drug trafficking, to help compensate their victims.

“There is no time to waste,” Santos said in a televised statement on Monday.

However, a period of discord and uncertainty looks certain from now on, as opponents threatened to resist the revised deal.

“We invite citizens to persist in the struggle for the future of democracy,” said Uribe’s Democratic Center party.

“In the coming days, we will examine various actions to call the people into the streets and democratic spaces,” it party said in a statement.

“This new deal will not go to a second referendum,” he said, noting that Santos will instead introduce it in Congress where it is expected to gain approval. 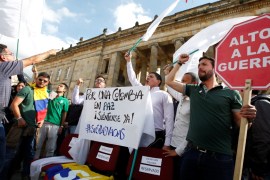