Two people have been killed and 16 others injured in a car bombing outside the governor’s office in the southern Turkish city of Adana.

Mahmut Demirtas, the governor, told the state-run Anadolu news agency that the explosion occurred at 8:05am local time [06:05 GMT] on Thursday in a car park close to the office entrance.

“It is suspected that a female suspect carried out the attack,” he said, adding that the licence plate of the suspect’s car had been identified.

CNN Turk news channel broadcast a video from the scene, showing a vehicle ablaze in the car park and thick black smoke rising into the sky.

Nearby vehicles and the governor’s building had been damaged in the incident, Anadolu said quoting preliminary reports.

The Turkish prime minister’s office has imposed a temporary broadcast ban on news of the blast, according to the Supreme Board of Radio and Television (RTUK). 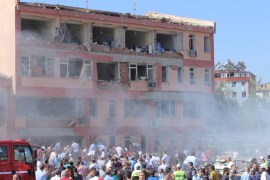 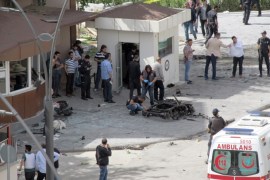