US President-elect Donald Trump has said he would “love” to reach a peace deal between Israel and Palestine, adding that he would appoint his son-in-law as a Middle East envoy and help broker a deal after he takes charge at the White House.

While Trump said both sides would have to “give up something” during the negotiations to reach an acceptable deal, he promised that he would exercise the US veto “100 percent” of the time at the Security Council.

“I would love to be the one who made peace with Israel and the Palestinians, that would be such a great achievement,” Trump told the New York Times on Tuesday.

It is not the first time Trump has expressed his desire to reach an agreement between the two parties.

In March, speaking at the annual convention for the American Israel Public Affairs Committee (AIPAC), a notorious pro-Israel lobbying group in Washington, DC, Trump blasted the United Nations for what he said was its attempt to “impose” an agreement between Israel and Palestine.

Palestinians and their allies have repeatedly called on the UN to step in and force Israel to cease its settlement activity in the occupied West Bank, which they say is the first hindrance to serious negotiations.

Critics have suggested that the role the US has played in the past as neutral broker was a betrayal of the apparent preference the country has given Israel over the Palestinians, primarily with regards to military aid and intelligence sharing.

Trump reaffirmed these sentiments during his AIPAC speech, saying that “the Palestinians must come to the [negotiating] table knowing that the bond between the US and Israel is absolutely, totally unbreakable” and that “there is no moral equivalency” between both sides.

Several right-wing Israeli leaders celebrated Trump’s victory earlier this month, including Education Minister Naftali Bennett, who said “the era of a Palestinian state is over”.

A New York Times reporter tweeted that Trump also suggested that his son-in-law Jared Kushner could help broker the deal.

Kushner, who is married to Trump’s daughter Ivanka, is an observant Orthodox Jew and the grandson of Holocaust survivors and is a strong advocate for Israel.

According to Trump, Kushner “could be very helpful” in brokering an agreement between Israel and Palestine.

Kushner has recently come into the spotlight as one of the most notable figures of the Trump electoral campaign.

According to a recent Forbes profile, Kushner is “uniquely position[ed] to be a power broker of the highest order for at least four years”.

Trump has repeatedly made his desire known to appoint Kushner to a cabinet position but anti-nepotism laws in the US seemingly stand in the way.

However, Trump says he should be able to designate Kushner as his “special envoy” to a region “he knows”. 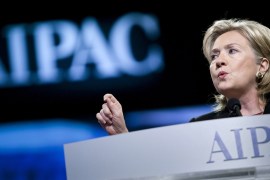