A “senior al-Qaeda leader” in Syria was killed last week by a US air strike, according to the Pentagon.

Cook said that Masri had originally joined al-Qaeda in Afghanistan and later moved to its Syrian affiliate.

“He had ties to terrorist groups operating throughout southwest Asia including groups responsible for attacking US and coalition forces in Afghanistan and those plotting to attack the West,” Cook said.

A handful of Arabic-language news agencies had reported Masri’s death at the time.

Masri was a religious judge in Jabhat Fateh al-Sham, an armed group formerly known as the al-Nusra Front until its formal break with al-Qaeda earlier this year.

The air strike was the latest in the US programme of targeted killings in Syria and Iraq. Earlier this month, the Pentagon announced that on October 17 it had killed Haydar Kirkan, who it said was a member of al-Qaeda and had been close to the late Osama bin Laden.

In October, the Pentagon said a US air strike near Idlib had targeted a Nusra Front senior leader, Ahmed Salama Mabrouk, an Egyptian also known by his nom de guerre Abu Faraj.

WATCH: The Disappeared of Syria

The Syrian conflict started as a largely unarmed rebellion against Syrian President Bashar al-Assad in March 2011, but it quickly escalated into civil war. Throughout the past five years, hundreds of thousands of people have been killed during the fighting, though estimates vary widely.

The conflict has drawn the intervention of the United States, Turkey and Arab countries, each supporting rebel groups to varying degrees, as well as Russian and Iranian forces backing the Syrian government.
Elsewhere in Syria, fighting has intensified between government forces and rebels in the divided city of Aleppo.

At least 141 civilians, including 18 children, have been killed in a week of renewed bombardment on the rebel-held eastern half of Aleppo, which has devastated its hospitals, the Syrian Observatory for Human Rights said on Tuesday.

The Britain-based war monitor said it had documented hundreds of injuries as a result of Russian and Syrian air strikes and shelling by government forces.

The assault began last Tuesday after a weeks-long pause in air strikes and shelling inside east Aleppo, although battles and air strikes did continue along the city’s frontlines and in the surrounding countryside.

The Observatory said there were another 87 deaths of rebel fighters and people of unknown identity in the eastern sector.

It also documented 16 civilian deaths, including 10 children, and dozens of injuries as a result of rebel shelling of government-held west Aleppo. 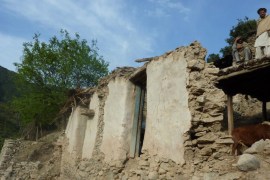 “Couple” of air strikes follow US president’s decision to expand Pentagon’s involvement in fight against the Taliban. 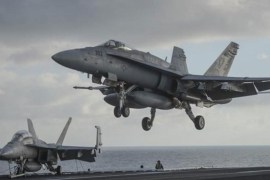 At least 16 senior members of the group killed in an air strike on an airbase it controls in northwest of the country.