Jerusalem – Last August, Pam Bailey, an American citizen and secretary of the Gaza-based Euro-Mediterranean Human Rights Monitor, was denied entry to Israel upon arrival at Tel Aviv’s Ben Gurion airport. Israeli authorities detained her for 11 hours, while the airline retained her passport until she landed back on US soil.

She was banned from returning for 10 years.

“I had a permit to enter Gaza,” said Bailey who had visited Gaza a number of times before. “Israel says it’s not occupying Gaza, but it won’t let visitors in. Isn’t that the definition of a prison? We don’t want to go into Israel; we want to go to Palestine,” Bailey told Al Jazeera. “Do you know of any other situation in the world where one country can decide who gets in and out of another?”

Bailey is among a number of activists, researchers and journalists who have recently been denied access by the Israeli authorities, as Israel tightens its grip on Palestinians and their international supporters.

READ MORE: Is Israel ramping up crackdown on BDS activists?

The UN’s Access Coordination Unit website logs such incidents, and according to Euro-Med figures, there has been a considerable increase in the number of forced cancellations of trips and deportations or denials of entry, to both Gaza and the West Bank.

Israel says it's not occupying Gaza, but it won't let visitors in. Isn't that the definition of a prison? We don't want to go into Israel; we want to go to Palestine.

Based on the UN report, and other data collected by Euro-Med, the organisation estimates that deportations rose to around 10 percent in 2016, from just one or two percent in the three years prior.

The UN only logs cases reported to its Access unit by UN and international NGO staff, excluding deportations or denials of entry to independent workers and consultants.

International organisations have also reported a progressive deterioration in freedom of movement for Gaza-based staff since the beginning of the year. Permit denials for UN workers increased from three percent in January 2016, to 65 percent in August, and 45 percent in September.

“In absolute numbers, at least 280 applications for exit permits from Gaza have been denied for both UN and INGO [international NGO] national staff this year so far,” Robert Piper, the United Nations humanitarian coordinator in the occupied Palestinian territories , told Al Jazeera.

“Additionally, some of our UN staff have recently been banned from applying for permits for a whole year, with little explanation provided,” he noted. “Instances of permit confiscation and lengthy interrogation by Israeli security authorities at Erez crossing are also on the rise.”

Palestinians with Gaza IDs have to apply to Palestinian and Israeli authorities for special permits to leave Gaza via the Erez crossing with Israel, including patients who need treatment, students with visas to study abroad and local humanitarian workers. “In most cases, we are not provided with details on the reasons for denial of permits of our teams,” Piper said.

In August, Israel alleged that the Christian aid organisation, World Vision, had diverted millions of dollars of Gaza aid money to Hamas. Mohammad el-Halabi, who managed World Vision’s Gaza operations, had been accused of diverting $50m from the organisation’s budget over seven years.

A few days later, however, news emerged that the sum was more than twice the organisation’s budget in Gaza, over the same period. In addition, Halabi had previously been in a different position, with no control over the organisation’s full budget. Halabi was reportedly beaten and prevented from seeing a lawyer for 21 days, while World Vision is currently not allowed to attend his trial – proceedings over which Amnesty International has voiced concerns .

At the same time, Israel accused engineer Waheed Borsh, who has worked for the UN Development Programme (UNDP) since 2003, of diverting rubble for military purposes. The UNDP said the rubble had been taken to a location designated by the Palestinian Authority, complying with written instructions.

Borsh, who was also accused of prioritising reconstruction in areas where Hamas members live, was indicted in September. His trial is ongoing.

August saw the most substantial rise in restrictions on freedom of movement in Gaza, generally. According to the NGO Medical Aid for Palestinians, the month marked the lowest permit approval rate for patients leaving Gaza via Erez in seven years, with 186 denied and more than 700 receiving no response.

But Amjad Shawa, director of the Palestinian NGO Network, told Al Jazeera that, while obtaining permits for Palestinian NGO workers to travel out of Gaza had become slightly easier towards the end of 2015, restrictions came back in full force last March.

“Liaising with donors, lobbying, capacity building – all these are restricted now. In the meantime, Gaza suffers from the worst humanitarian conditions in years and a high percentage of unemployment as a result of the blockade,” Shawa told Al Jazeera.

OPINION: Portrait of an Occupation

A spokesperson for the Coordinator of Government Activities in the Territories, or COGAT, a branch of Israel’s defense ministry, told Al Jazeera that its “civil policy towards the Gaza Strip of examining permits for the assistance of the population has remained unchanged”.

In July, Israel passed a controversial law that required Israeli NGOs to disclose their foreign funding. Critics of the law say that it targets human rights organisations that defend the rights of Palestinians in the occupied territories.

Groups such as B’Tselem and Breaking the Silence have been the targets of a mounting demonisation campaign by Israeli politicians and right-wing groups, which the Israeli has press echoed.

In mid-October, Prime Minister Benjamin Netanyahu announced plans to amend Israel’s National Service Law, a voluntary alternative to military service for those who qualify for exemption, so that it would no longer be possible to serve with B’Tselem (which does not currently have any national service volunteers).

The decision came after the organisation took part in a special meeting about settlement construction at the UN Security Council.

Palestinian-run organisations, already subject to greater restrictions, have also been feeling increased pressure as a result of the smear campaign against organisations perceived as “pro-Palestinian”.

Al Haq, a human rights organisation, reported death threats directed at its staff earlier this year. The Jerusalem-based NGO Monitor, whose stated mission is to ” document and publicise distortions of human rights and international law in the context of the Arab-Israeli conflict”, has been increasingly singling out foreign organisations for “demonising Israel”.

Many in the NGO world are privately voicing concerns of an Israeli “war on NGOs”.

Al Jazeera has also learned that some NGO workers have faced increasing difficulties in renewing their work visas over the past two months. In at least one case, a worker was stuck outside the country for weeks due to delays in processing the visa application.

It is unclear whether this constitutes a change of policy, and NGOs prefer to keep a low profile to preserve their access rights.

“Looking ahead, we fear that any worsening in the political and security situation could lead to greater access restrictions, as has been the case in the past,” Piper said. 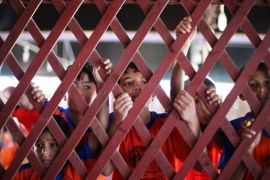 Letter from Gaza: ‘War was never over’

Palestinian doctor and journalist Belal Aldabbour reflects on the implications of increased tensions in Gaza.