The impeachment of South Korea’s embattled President Park Guen-Hye in a snowballing corruption case has inched closer as opposition parties decided to make a push for it.

The move on Monday came the day after prosecutors named Park a criminal suspect in a major influence-peddling case, tightening the noose on an already hugely unpopular leader.

Park’s close friend Choi Soon-sil and a former presidential aide have been charged with abuse of power. They are accused of pressuring companies to give money to foundations at the centre of the scandal.

“We will immediately review the timing and methods of impeachment and set up a subcommittee to review a push for impeachment,” said Choo Mi-Ae, head of the main opposition liberal Democratic Party.

Two smaller opposition parties have also said they will seek to remove her.

“Certainly the largest opposition party [the Democratic Party] has said that its first main preference would be for the president to quit, which would be a much faster, simpler process to lead to a new election in a much short timeframe” Al Jazeera’s Wayne Hay, reporting from Seoul, said.

“But there is no sign the president is going to bow to pressure to resign.”

Parliament members have been under growing public pressure to oust Park, with weekly protests drawing hundreds of thousands of demonstrators across the country.

“The impeachment vote would take place in the national assembly,” Hay said. “They believe they will have the numbers to get the two-thirds majority [vote needed for impeachment] because many of the president’s own party members have also supported the move for her to be impeached.”

If the impeachment vote does pass, it would then move to the constitutional courts, where judges would have to rule on the matter within six months.

Park’s single, five-year term ends in February 2018, and observers say she is likely to do all she can to serve out her time because a sitting president cannot be charged with a criminal offence except insurrection or treason.

On Sunday, Seoul prosecutors said Park had colluded with her long-time friend, Choi Soon-Sil, who is accused of coercing more than $60 million from local firms and meddling in state affairs. 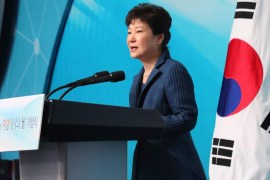 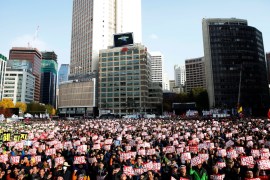