India’s rescue workers concluded their search of the mangled carriages of a derailed train, bringing the number of passengers killed in the disaster to at least 142 and the injured to more than 200.

Sunday’s derailment in the state of Uttar Pradesh was India’s deadliest train crash since 2010 and has renewed concerns about poor safety standards of the state-run network, which is a lifeline for millions of Indians.

Police at the accident site said rescue teams had finished their search for bodies buried in the 14 carriages that derailed in the early hours while most of the more than 500 passengers were asleep.

“The rescue operations are over. We don’t expect to find any more bodies,” said Zaki Ahmed, police inspector general in the northern city of Kanpur, about 65km from the site of the crash in Pukhrayan.

An Indian Railways spokesman, however, said rescue workers were trying to lift some wreckage to look for survivors.

“They are trying to lift the coach with the help of cranes, and check if there are any bodies,” said Indian Railways spokesman Anil Saxena said.

“We can be sure only after the coach is lifted up and removed from the track.”

Earlier, rescue workers, soldiers, and members of India’s disaster management force worked through the night to pull out people trapped amid the twisted metal and overturned coaches.

The passenger train was about midway through a 27-hour journey between the cities of Indore and Patna when it slid off the tracks at 3:10am local time on Sunday (2140 GMT Saturday).

‘The doors would not open’

Passengers were jolted awake and said they heard the crash as they were flung from their beds.

“There was a massive jerk all of a sudden,” Ravindra Pathak, a passenger on the train, told Al Jazeera.

“Our heads hit the roof of the train and after that the coach was derailed. The doors wouldn’t open but we somehow managed to come out. That’s when we saw the train had derailed.”

Rail authorities ordered an investigation into what caused the derailment. Some told local media they suspected faulty tracks.

“We haven’t seen an incident like this in Indian Railways for a long time,” said the state’s railways minister, Rajen Gohain, according to the Indian Express newspaper.

“There must be a fault in the track as 14 bogeys have derailed, and this happened despite regular checking of the tracks.” 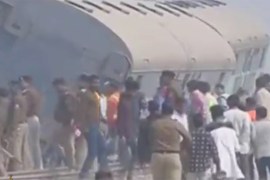 Train was travelling from Patna to Indore when it derailed on Sunday morning, throwing several carriages off the tracks. 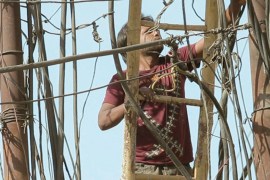 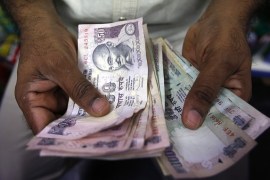 India: The next global economic powerhouse?

We explore how India outpaced China as the world’s fastest-growing economy but still struggles to reach its potential.