Northwest Europe has been hit by the first big storm of the autumn-winter season. The British Isles, the Low Countries and parts of Scandinavia were lashed by high winds and heavy rain.

The storm, regionally known as Storm Angus, struck on Sunday morning. A gust of 119 kilometres an hour was recorded in Jersey. The winds were even fiercer in Guernsey with a gust of 135km/h.

At one point, more than 1,000 customers in southwest England, most of whom were in Devon, were without power according to Western Power Distribution.

The strong winds were accompanied at times by torrential rain, with many parts of southern England reporting 40mm to 50mm of rain during the day.

The wet and windy weather then made its way into the North Sea by early afternoon. There was a gust of 130km/h at Langdon Bay, in Kent.

Shortly afterwards a gust of 170km/h was recorded about 35km off the coast of Margate as the system moved out into the North Sea.

The strongest winds were on the storm’s southern flank and that meant that the violent weather extended across the English Channel into the Low Countries.

Belgian weather forecaster, Jill Peeters said warnings were issued for damaging winds gusting up to 90 to 100km/h in and around Antwerp. Located on the coast, 99km to further west, Zeebrugge had a gust of 115km/h.

Little wonder that the Cyclocross World Cup, in Koksijde, Belgium, was call off for the first time in 14 years of competition.

Meanwhile, the Dutch port city of Ijmuiden found itself badly exposed and recorded a gust of 133km/h. However, the “Cycling against the wind” event taking place in the Netherlands did go ahead regardless.

The worst of the weather has now passed through, but another storm is currently lining up to move across the Brest Peninsula. The winds will not be as strong, but gales or even sever gales are likely at times. 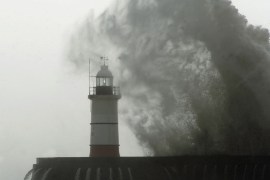 Severe weather barrels in from the Atlantic, bringing damaging winds and torrential rain to northwest Europe. 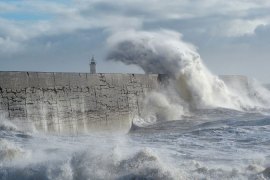 Strong winds cause widespread disruption from Scotland to the Baltic States. 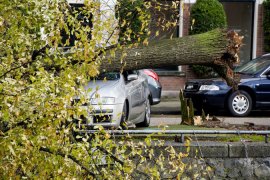 St Jude’s Day storm goes on to claim lives in France, Germany, Denmark and the Netherlands.