Bolivian President Evo Morales has declared a national emergency over a lack of water caused by a severe and prolonged drought.

Morales said on Monday, that national and local governments are authorised to use state resources to attack the problem.

Much of the high-altitude capital already receives water for just three hours every three days, because reservoirs serving the city are nearly dry.

Morales said Bolivians “have to be prepared for the worst”.

Weak La Nina conditions in the Pacific have exacerbated the drought, and the wet season isn’t expected to start until early December.

On Sunday, authorities declared water rationing in La Paz to be a permanent measure as the drought in Bolivia worsens.

The main Ajuan Khota dam is at one percent of capacity, while the other two dams are averaging eight percent capacity.

This has led to water cuts in some neighbourhoods for the first time. The Corque municipality has been hit particularly hard, according to a report from the Pan American Health Organisation, and 70 percent of the population lacks drinking water.

Morales sacked his top state water authorities and apologised for extended water rationing in the capital.

The neighbouring city of El Alto is also concerned about the lack of water. A week of protests by frustrated residents has escalated tensions.

On Thursday, leaders of the Federation of Town Councils, known as Fejuve, held officials and water authorities hostage after the minister of environment and water, Alexandra Moreira, failed to turn up for a meeting to report on a water supply project in the city of El Alto.

Riots over water have broken out in Bolivia in the past. In 2004, riots resulted in the control of water being handed over from private companies to the state.

In recent decades, Bolivian glaciers have shrunk drastically and affected the lives of millions who depend on glacier melt for water. 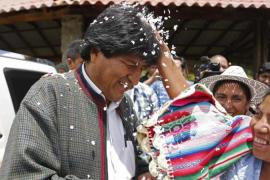 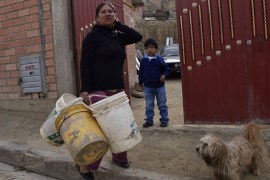 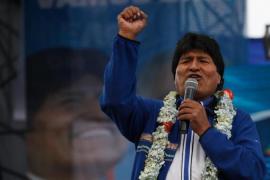