Iraqi troops have advanced against Islamic State of Iraq and the Levant fighters towards the centre of Mosul after more than a month of hard-fought street battles.

As Iraqi forces pushed into the city on Sunday, they were again slowed down by sniper fire and suicide bombings.

A few hundred civilians emerged from rubble-strewn frontline neighbourhoods in search of safer ground, including women and children, some of them carrying bags or small suitcases.

Speaking to Al Jazeera, local resident Abu Ammar said Mosul inhabitants were gripped with fear. “We have no water and no food and we are frightened. Children are frightened, too,” he said.

Major-General Sami al-Aridi told the Associated Press news agency that his special forces were searching homes in areas retaken from ISIL, while looking for fighters and vehicles rigged with explosives. Troops in those areas continue to be hit by mortar and sniper fire, he said.

Another Iraqi army commander, Brigadier-General Haider Fadhil, said four civilians were killed and another four wounded when a suicide car bomb exploded before it could reach the troops it was targeting late on Saturday.

The troops laid siege on Sunday to the al-Zohour neighbourhood, about 8km from the city centre. The arrival of the troops at the neighbourhood’s fringes prompted hundreds of civilians to emerge from their homes waving white flags.

“The biggest hindrance to us is the civilians, whose presence is slowing us down,” Aridi said. “We are soldiers who are not trained to carry out humanitarian tasks.”

The Iraqi military began the campaign one month ago to retake Mosul, Iraq’s second largest city and ISIL’s last major urban bastion in the country.

Most gains have been made by the special forces operating in the section of Mosul east of the Tigris river. Other forces are advancing on the city from different directions, and the US-led coalition is providing air strikes and other support.

The UNHCR, the United Nations’ refugee agency, estimates that upwards of 60,000 residents have fled their homes in Mosul and the surrounding area since the outset of the massive military operation on October 17.

“There has been a marked increase over the past week in the number of people fleeing after fighting intensified in the more densely-populated urban areas of Mosul,” said UNHCR spokesman Adrian Edwards.

ISIL captured Mosul in the summer of 2014 as part of a blitz that placed nearly a third of Iraq under their control.

Army troops have arrived on the outskirts of Tal Afar, west of Mosul, to reinforce state-sanctioned Shia militias, who have captured the town’s airport and are preparing to retake the town, according to two senior militia officials who spoke to AP on condition of anonymity.

Before its capture by ISIL, Tal Afar’s had an estimated 200,000 residents.

Human Rights Watch said in a report on Sunday that Shia militiamen fighting alongside the Iraqi military detained and beat 22 men from villages near Mosul and recruited 10 children from displaced camps in the area to join the fight against ISIL.

“The Iraqi authorities should investigate any alleged acts of torture and cruel and inhuman treatment in custody and charge those responsible for war crimes, including anyone with command responsibility who should have known about the crimes and failed to take all reasonable measures to prevent them,” said the New York-based advocacy group.

“The US should press the Iraqi government to ensure that the troops they are supporting don’t have fighters under 18 in their ranks,” said Lama Fakih, HRW’s deputy Middle East director.

In Baghdad, four separate bomb attacks targeted commercial areas on Sunday, killing at least 10 civilians and wounding 34, according to police and health officials, who spoke on condition of anonymity because they were not authorised to brief the media.

There was no immediate claim of responsibility for any of Sunday’s attacks. 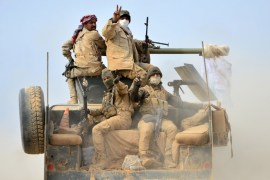 Baghdad, Kurds at odds over control of post-ISIL Mosul

A month into Mosul push, Iraqi and Kurdish leaders offer differing views of who will control city after its recapture.