The death toll in a fire at a ship demolition yard in southern Pakistan has risen to 18, after more bodies were
retrieved overnight, according to officials.

More than 50 labourers with burn injuries were being treated at hospitals after an explosion caused the fire on a ship in the Gadani Ship Breaking Yard in the town of Hub, Jahffar Khan, local police chief, said on Wednesday.

He said the fire, which broke out at 10am local time (05:00 GMT) on Tuesday, was so intense that dozens of firefighters are still trying to put it out.

The casualty figure is expected to rise, Khan said.

The fire started in a dismantled oil tanker that was stationed in the yard, according to local media reports.

Several explosions occurred inside the oil tanker while the workers were performing gas-welding work.

Ghadani, in the southwestern Pakistani province of Balochistan, is the country’s largest centre for ship demolition.

Thousands of labourers work in the Pakistani ship-breaking industry under poor conditions and with low safety standards.

They are often the victim of deadly accidents.

The Ghadani ship-breaking industry has fallen on hard times recently and employs about 9,000 workers, fewer than in its boom years at the end of the last decade. 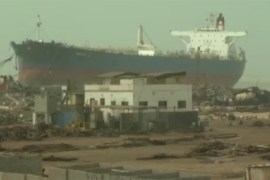 Labourers earn $5 per tonne they scrap whilst owners make many times that selling recycled steel. 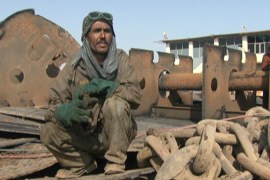