Asian Americans make up only 4 percent of the US electorate, but could be a decisive voter group. They are heavily concentrated in important swing states such as Nevada and Virginia.

The group was, until recently, firmly and reliably Republican. Now, they are now the fastest-growing racial minority in the United States and are turning Democratic faster than any other racial group.

Donald Trump’s anti-immigrant rhetoric and China bashing have made him particularly unappealing to these voters.

Meanwhile, Clinton’s campaign has made extensive efforts to reach Asian Americans, with volunteers fluent in Chinese, Tagalog, Vietnamese and Korean. And those efforts appear to be paying off.

A nationwide survey of Asian Americans conducted in October showed 55 percent were planning to vote for Clinton while only 14 percent supported Trump.

In the past, Asian-American voter turnout has been low. But with get-out-the-vote efforts, such as volunteers going door to door, and encouragement of early voting, community leaders hope to change that.

“We say, ‘Your voice matters, it’s time for you not to be invisible anymore, but to be visible'”, says Vida Lin Chan, who runs a non-partisan political engagement organisation. “It’s time for us to say that we matter.” 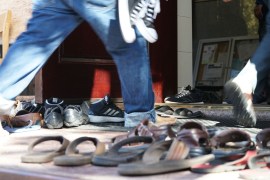 Muslim and Arab Americans, despite being only slivers of US electorate, could hurt Republican candidate’s chances.