ISIL fighters might be responsible for killing more than 300 Iraqi former police officers three weeks ago and burying them in a mass grave near the town of Hammam al-Alil, south of Mosul, according to Human Rights Watch (HRW).

A Reuters news agency reporter visited the site of the mass grave, where residents said that fighters from the Islamic State of Iraq and the Levant (ISIL) group, buried victims who had been shot or beheaded.

The residents said they believed that up to 200 people were killed in the weeks before ISIL withdrew from the town.

HRW, the US-based rights watchdog, said on Thursday that some of the former policemen were separated from a group of about 2,000 people from nearby villages and towns who were forced to march alongside the fighters last month as they retreated north to Mosul and the town of Tal Afar.

It quoted a labourer who said he saw ISIL fighters drive four large trucks carrying 100 to 125 men, some of whom he recognised as former policemen, past an agricultural college close to the site which was to become the mass grave.

Minutes later, he heard automatic gunfire and cries of distress, he said. The next night, on October 29, a similar scene was repeated, with between 130 to 145 men, he told HRW.

Meanwhile, due to poor weather and cloudy skies, Iraq special forces on Thursday paused temporarily in their push into Mosul but still faced deadly attacks from ISIL, also known as ISIS, including a suicide car bombing.

In the city’s eastern Tahrir neighbourhood, a car packed with explosives sped out from its hiding spot in a school complex, ramming into Iraqi troops’ position and exploding into a ball of fire.

A soldier was killed and three were wounded, two officers said, speaking on condition of anonymity because they were not authorised to talk to reporters.

Clouds over the city obscured the visibility of drones and strike aircraft, said Brigadier-General Haider Fadhil, adding that troops are using the pause to secure areas they have taken with checkpoints and are sweeping for explosives.

The US coalition providing air cover and reconnaissance for the advancing forces has been a key element in the success of the Mosul battle so far, and the fighting stalls when the air power cannot be used.

On Wednesday, heavy fighting broke out in Tahrir, where an ISIL suicide car bomber disabled an Abrams tank belonging to the Iraqi army.

Iraqi forces launched the long-awaited operation to retake Mosul nearly a month ago but have only advanced into a few eastern districts. 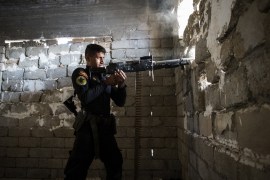 Street battles rage in Mosul suburbs as ISIL hits back 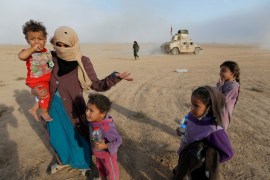