Intense air strikes have hit several rebel-held areas in Aleppo for the first time in more than two weeks, signalling the start of a major government offensive in Syria’s northern city.

The ferocious bombardment of eastern Aleppo on Tuesday came as Russian armed forces also announced the launch of a large-scale operation against opposition targets in Syria.

Syrian state television said government jets carried out attacks against what it called “terrorist strongholds” and supply depots in the old city of Aleppo, citing what it described as “special sources”.

The air strikes killed at least 10 people in Aleppo city, according to The Syrian Observatory for Human Rights and other groups.

“In the last few hours at least nine neighbourhoods inside the city of Aleppo have come under intense bombardment,” said Al Jazeera’s Osama bin Javaid, reporting from Gaziantep, on the Turkish side of the Syria-Turkey border.

“Residents from inside Aleppo tell us that there is chaos and mayhem in the streets – where there are streets still remaining.

Many parts of Aleppo have been cut off from other areas because they were targeted in earlier air strikes and roads were taken.

Medics say they are trying to reach those areas, but they are still stuck inside their homes because enemy aircraft are still in the air,” Javaid said.

“In the northern part of Aleppo, air strikes have been the most intense and activists there tell us that this is where they expect that a ground incursion will occur.”

READ MORE: In east Aleppo, ‘there is no way out’

“It’s all air strikes and parachute bombs. Today, the bombing is violent … There hasn’t been this kind of attack in more than 15 days,” said Ibrahim Abu al-Laith, an Aleppo-based spokesman for the Syrian Civil Defence group, adding that fighter jets and helicopters were still visible in the sky.

The Syrian Civil Defence, also known as the White Helmets, is a first responder group that operates in rebel-held areas across the country.

“For the first time in our naval history, the aircraft carrier Admiral Kuznetsov started taking part in combat,” Shoigu said.

“Today from this carrier, our Sukhoi-33 began their operations.”

He said Russian jets would target ammunition depots, training camps and armaments factories in the rebel-held province of Idlib and the central province of Homs.

“We launched a major operation to strike the positions of the ISIL and Jabhat al-Nusra in the provinces of Idlib and Homs,” he said, referring to the armed group previously known as the al-Nusra Front.

In the northwestern province of Idlib, a member of the Jund al-Aqsa group, known as Abu-Dardaa-al-Shami, told the Associated Press news agency over the phone that the air strikes were “much, much, much more intense than previous ones”.

He said that in addition to the air raids, ballistic missiles hit the province near the town of Saraqeb.

The Observatory, a UK-based group monitoring the war, said missiles fired from Russian warships in the Mediterranean struck areas in Aleppo province and on the eastern edge of nearby Idlib. Syrian activists also reported strikes in Idlib, Homs and Aleppo.

The ministry said that Russian and Syrian jets have not bombed the city in the last 28 days.

“What we are not hearing at the moment from the Russians is any mention of Aleppo, only at the moment … strikes against Idlib and Homs province.”

Elizabeth Trudeau, US state department spokesperson, said the renewed bombing coincided with multiparty talks in Geneva between the United States, Russia and other countries seeking to achieve a ceasefire in the conflict and a roadmap towards a political settlement.

“We strongly condemn the resumption of air strikes in Syria by the Russians as well as the Syrian regime,” Trudeau told reporters. “The most recent reported attacks were on five hospitals and one mobile clinic in Syria. We believe it’s a violation of international law.”

Trudeau said Russia had allowed no food or other aid into east Aleppo during its suspension of bombing.

“It let eastern Aleppo residents starve while seeking praise from the international community for halting indiscriminate strikes for three weeks,” she said.

Western countries and human rights activists have accused the air forces of the Damascus government and its Russian ally of repeatedly targeting hospitals, bread lines and other civilian infrastructure in territory controlled by the rebels.

Both Russia and Syria have denied doing so, and say their air campaign is directed against military targets belonging to the opposition fighters, who they describe as “terrorists”.

Aleppo has for years been divided into government-held western and rebel-held eastern sectors, but the Syrian army and its allies managed to isolate and besiege the rebel-held districts during the summer.

A government offensive to retake eastern districts raged from late September to late October, backed by an intense aerial bombardment that the UN said killed hundreds and drew condemnation from western countries and rights groups.

However, after Syria and Russia announced their pause in strikes last month – a move they said was to let those who wished to quit besieged areas – rebels launched their own assault that killed dozens of civilians in west Aleppo, according to the UN. 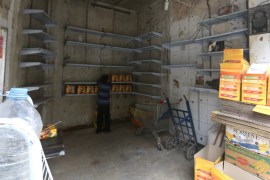 Government forces say they are preparing a major offensive, while rebels say such messages are psychological warfare. 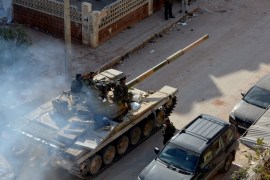