Nicolas Sarkozy’s links with Muammar Gaddafi have come under fresh scrutiny after a businessman admitted delivering three cash-stuffed suitcases from the late Libyan leader towards the Frenchman’s first presidential bid.

In an interview with the Mediapart investigative news site, Franco-Lebanese businessman Ziad Takieddine has said he made three trips from Tripoli to Paris in late 2006 and early 2007 with cash for Sarkozy’s campaign.

Each time he carried a suitcase containing between 1.5 and 2m euros in 200-euro and 500-euro notes, Takieddine told the site in a video interview, saying he was given the money by Abdallah Senussi, Gaddafi’s military intelligence chief.

Sarkozy, 61, seeking to return to power as French president, denied on Tuesday receiving money from Gaddafi to fund his election bid, calling claims by Takieddine a “crude manipulation”.

During questioning in a separate case, Takieddine accused Sarkozy of having been in Gaddafi’s pocket in 2006-07 but he had never previously claimed to be the bagman.

The allegations against Sarkozy first emerged in March 2011, when the French leader was campaigning for the NATO-led military intervention that helped overthrow Gaddafi.

“Sarkozy must first give back the money he took from Libya to finance his electoral campaign,” said Gaddafi’s son Saif al-Islam, who is now in jail in Libya.

A year later, as Sarkozy was campaigning for a second term, Mediapart published a document signed by Musa Kusa, the former Libyan intelligence boss, referring to an agreement for 50m euros [$54m at current rates] in backing from Tripoli.

Sarkozy, who lost his 2012 re-election bid, vigorously denied the allegations, claiming the document was a fake.

Takieddine’s video testimony comes five days before Sarkozy goes up against Alain Juppe, the former French prime minister, and other rivals in a primary to choose the candidate of the French right in next year’s presidential vote.

The first round of the two-stage primary takes place on Sunday.

Sarkozy, who is trailing presidential front-runner Juppe in opinion polls, is embroiled in several scandals.

He has been charged with influence peddling in a separate affair and with illegal financing of his 2012 campaign.

Sarkozy has accused the judiciary of trying to block his comeback ambitions. 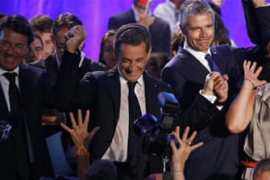 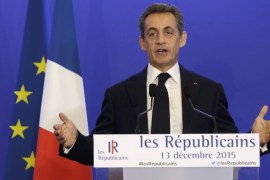