A suicide bomber on foot struck a government vehicle, killing at least six people and wounded several others, in an attack claimed by the ISIL.

The latest bombing on a vehicle carrying national security officials in Kabul came during the morning rush hour, as fighters intensify nationwide attacks on the Western-backed government.

He put the death toll at six, including five civilians and one military official, with 10 wounded in the blast, which occurred close to the defence ministry.

The SITE monitoring group said the Islamic State of Iraq and the Levant (ISIL, also known as ISIS) group’s local Khorasan province affiliate had claimed the attack in a communique claiming it had targeted Afghan intelligence officials.

Fighters from ISIL, which controls territory across Syria and Iraq, have been making steady inroads in Afghanistan, winning over sympathisers, recruiting followers and challenging the Taliban on their own turf, primarily in the country’s east.

Last week, four people were killed and 128 others were wounded when a suicide bomber drove truck loaded with explosives into the German consulate in the northern city of Mazar-i-Sharif.

At least four people were killed in an explosion inside the largest US military base in Afghanistan, with the Taliban claiming responsibility for the attack. 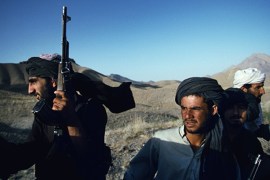 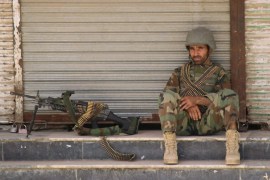