Britain has no overall plan for Brexit and the strategy for leaving the European Union might not be agreed for six months, according to a leaked memo seen by British media outlets.

The leaked document, prepared for the Cabinet Office by a consultant, said government departments were working on more than 500 Brexit-related projects and might require an additional 30,000 civil servants.

Prime Minister Theresa May’s office said it did not recognise the claims made in the memo.

“This is not a government report and we don’t recognise the claims made in it,” a spokesman for May’s office said.

“We are focused on getting on with the job of delivering Brexit and making a success of it.”

Titled “Brexit Update” and dated November 7, the memo criticises May for her tendency of “drawing in decisions and details to settle the matter herself,” the BBC and The Times reported on Tuesday.

“[The memo] suggests that perhaps as many as 30,000 extra staff are needed, and it talks about serious splits within the cabinet on the best way forward,” Al Jazeera’s Barnaby Phillips said, reporting from London.

Foreign Secretary Boris Johnson, Trade Minister Liam Fox and Brexit Minister David Davis were on the Leave side during the referendum campaign, and finance minister Philip Hammond and Business Secretary Greg Clark were with Remain.

The document also says that “major players” in industry were likely to “point a gun at the government’s head” to secure assurances similar to that given to car maker Nissan that it would not suffer from Brexit.

May has promised to trigger Article 50 of the Lisbon Treaty, which kicks off two years of talks to leave the EU, by the end of March, but she has so far given little away about her plans for Britain’s future relationship with the bloc.

The UK’s High Court ruled earlier this month that May’s administration would not be allowed to trigger the country’s exit from the EU without approval from parliament. 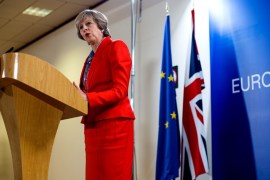 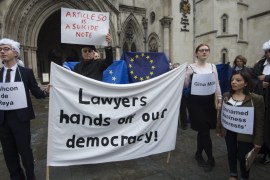 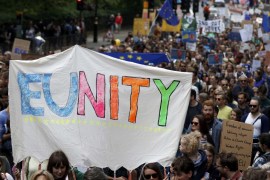