The Arab coalition and Houthi rebels fighting in Yemen have agreed to a temporary cessation of hostilities starting on November 17, and to work towards installing a national unity government, US Secretary of State John Kerry said on Tuesday.

However, shortly after Kerry’s announcement, Yemeni Foreign Minister Abdel-Malek al-Mekhlafi said his government was not interested in a ceasefire or political talks with the Houthi rebels.

An Arab alliance, made up of Saudi Arabia and other Arab states, launched a military campaign against Houthi fighters and their allies in March last year to support President Abd-Rabbu Mansour Hadi’s government following the rebels’ seizure of the capital, Sanaa, in 2014.

Speaking after talks in the United Arab Emirates, Kerry said that he had presented the rival parties with a document calling on pushing a proposed peace deal that included a call for a ceasefire.

Referring to a truce that began in April and lasted until the end of August, Kerry said the Houthis had agreed to “abide by the terms of the April 10 cessation of hostilities beginning on November 17, provided the other party implements the same commitment and thus far the Emiratis and the Saudis … they have both agreed to try to move forward with this”.

Kerry said all parties to the conflict had also agreed to work to set up a Yemeni national unity government by the end of the year.

However, Mekhlafi contradicted Kerry’s comments and accused the US secretary of state of interference.

“The government was not aware of, nor is it interested in what Secretary Kerry announced, which represents a desire to scuttle peace efforts by trying to reach an agreement with the Houthis apart from the government,” Mekhlafi wrote on his official Twitter page.

There was no immediate comment from the warring sides. Hadi’s government had previously rejected the latest peace proposal by the United Nations special envoy for Yemen.

There have already been several failed attempts to defuse the conflict in the country, which is facing a humanitarian catastrophe. 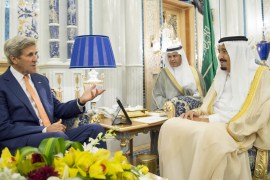 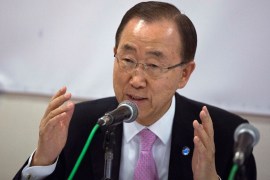