ISIL fighters in Iraq launched a series of suicide bomb attacks in the city of Fallujah and an oasis town south of Baghdad on Monday, killing at least 14 people and wounding dozens.

The attacks came as Iraqi forces and their allies continue fighting ISIL in the northern city of Mosul, the armed group’s last major population centre in the country.

The Islamic State of Iraq and the Levant (ISIL) group has carried out several attacks in other areas of Iraq since the operation to retake Mosul was launched a month ago, in an apparent bid to draw attention and possibly troops away from the battle for the city.

The attacks were the first since Iraqi forces took back the city from ISIL, also known as ISIS, in June.

“These two explosions are the first … in Fallujah since its liberation,” said Raja Barakat, a member of the provincial council security committee in Anbar province, where Fallujah is located.

Earlier on Monday, a group of ISIL attackers armed with suicide vests and light weapons killed at least eight people in Ain al-Tamer, 50km from a Shia shrine in the city of Karbala, before blowing themselves, according to local officials.

The attack involved six suicide bombers who were detected by security forces before a major gathering in the area that is expected to draw tens of thousands of pilgrims.

Masum al-Tamimi, a member of the Karbala provincial council, said the attackers tried to infiltrate the town in the early hours before withdrawing to the al-Jihad area after clashing with security forces, where they detonated their explosives. He put the death toll at eight.

The interior ministry issued a statement on the attack, saying five of the bombers were killed by security forces while the sixth detonated explosives inside a house. The ministry put the death toll at six.

ISIL’s online statement put the number of the suicide bombers at five, saying they clashed for hours with the security forces and set off their explosives consecutively when they ran out of ammunition.

Al Jazeera’s Mohammed Jamjoom, reporting from Erbil, said the attackers were dressed as pilgrims trying to pass the checkpoint to enter the village.

“The policemen were suspicious of these bombers when they tried to enter the checkpoint. They detonated their explosive once the policemen opened fire at them,” Jamjoom said.

“The attack just underlines how volatile Iraq is, and not just Mosul, but other parts of the country as well where ISIL is regularly carrying out attacks.”

Attacks in southern Iraq are rare, especially compared with the frequent bombings that hit Baghdad.

But Ain al-Tamer, which is 50km from the Shia holy city of Karbala, is on the edge of Anbar province, which has long been a haven for al-Qaeda in Iraq – and now ISIL.

The group overran large areas north and west of Baghdad in 2014, but Iraqi forces backed by US-led air strikes have since regained much of the territory.

Iraqi government forces, supported by Kurdish Peshmerga fighters and Shia militias, as well as air and ground support from the US-led coalition, are now fighting to retake Mosul.

But ISIL fighters are putting up stiff resistance, while the group has been able to retain its ability to strike inside government-held territory with bombings and other attacks as it loses ground.

The offensive on Mosul entered its fifth week on Monday, with Iraqi government forces still trying to consolidate gains made in the eastern edge of the city that they breached end of October.

They are yet to cross into the northern and southern limits of Mosul, where more than a million people are thought to be still living.

Separately, a mixed Kurdish and Yazidi armed force known as the Sinjar Resistance Unit said on Monday it had dislodged ISIL fighters from five Yazidi villages west of Mosul in an advance that began on Saturday. 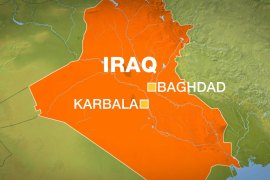