The bodies of former Polish president Lech Kaczynski and his wife will be removed from their tomb in Krakow, the first of more than 80 exhumations planned on prominent Poles killed in a plane crash in Russia in 2010.

Exhumations scheduled for after dark on Monday are part of a new investigation into the crash ordered by Poland’s conservative ruling party, Law and Justice, which is led by Jaroslaw Kaczynski, the late president’s twin brother.

Post mortem examinations will be carried out to determine the cause of the death and of the crash, identify all the remains, and check for explosives – since some of Kaczynski’s followers believe a planned blast downed the aircraft, killing all 96 aboard.

Kaczynski has cast doubt on earlier investigations – carried out by both Poland and Russia – which concluded that the crash was an accident caused primarily by bad weather and pilot error.

“There will not be a free Poland, a truly free Poland, without the truth, without a proper honouring of those who died, without a closure of this case, which has cast such a long shadow on our national and social life,” Kaczynski said last week.

The exhumations are proving controversial with most Poles dismissive of conspiracy theories, and some relatives aghast at the thought of their loved ones being exhumed.

“We stand alone and helpless in the face of this ruthless and cruel act,” the relatives of 17 victims wrote in an open letter.

“The forceful exhumations constitute a violation of a taboo existing in our culture that calls for the respect of the bodies of the dead,” said Malgorzata Rybicka, the widow of Arkadiusz Rybicki, a politician with Civic Platform, in an interview with the Tygodnik Powszechny magazine.

“It also shows the light-hearted approach to the feelings of the families.”

However, Malgorzata Wassermann – daughter of Zbigniew Wassermann, a politician who died – called the exhumations “a procedural must” given that Poland carried out no autopsies, as the stunned nation watched the dozens of coffins, draped in white-and-red national flags, arrive from Russia in 2010.

The Russian autopsy report on her father described him as having the healthy liver of a young man, when in fact the 60-year-old had only part of his liver left after an operation.

The tragedy occurred on April 10, 2010, when the presidential delegation was travelling to honour 22,000 Polish officers who were murdered by the Soviet secret police at the start of World War II in the Katyn forest and elsewhere.

The delegation included government members, politicians, military commanders and the relatives of officers killed in the wartime massacre.

The symbolism of the mission only added to the national grief and the suspicions. 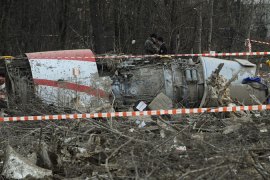 Country increasingly divided on the anniversary of the crash in Russia that killed the president and political elite. 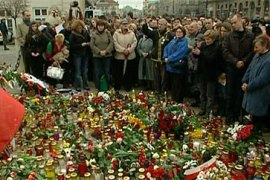