A pro-Russian politician has won Moldova’s presidential election, according to final results released on Monday.

In the full count, Igor Dodon won 52.2 percent of Sunday’s vote. His opponent in the race, Maia Sandu, who ran on an anti-corruption ticket, had 47.8 percent.

Speaking after his win, Dodon, the leader of the Socialist Party, said he would push for early parliamentary elections in 2017 to force out a government that favours closer ties with the European Union.

“A very serious combat is ahead but we are ready for this combat,” he told Russian state TV, referring to an election he wants to bring forward by a year.

Voters had “united and voted for friendship with Russia, for neutrality”, said Dodon, who campaigned for the scrapping of a trade deal the former Soviet state signed with Brussels in 2014.

But in her first comments after the final results, Sandu said the elections were neither free nor fair. and accused opponents of using “dirty methods”, including the media and administrative resources, against her.

She called for the resignation of authorities responsible for organising the elections.

On Monday, up to 3,000 mostly young Moldovans marched to the offices of the Central Election Committee in Chisinau, shouting “Down with the Mafia!”

Anger had also flared on Sunday after Moldovans voting in Britain, Ireland, France, Italy and elsewhere lined up for hours and ballot papers ran out. Sandu said the elections had been badly organised.

Dodon’s victory was celebrated with fireworks early on Monday in the semi-autonomous Gagauzia region, home of many ethnic Russians.

Dodon announced himself the victor at midnight on Sunday and called for calm, vowing to be a president for all Moldovans, regardless of their political views. He said he seeks good relations with the nation’s neighbours, Romania and Ukraine.

However, the office is expected to gain authority because Dodon is the first president in 20 years to be directly elected rather than being chosen by parliament.

The 41-year-old Dodon, who painted himself as a traditional Moldovan with conservative values, tapped into popular anger over the approximately $1bn that went missing from Moldovan banks before the 2014 parliamentary elections.

Dodon says he will move to rescind a law which obliges taxpayers to reimburse the $1bn, but parliament would have to agree. He has not called for a thorough investigation to find those responsible for the heist.

He wants to restore ties with Russia, which placed a trade embargo on Moldovan wine, fruit and vegetables in 2014 after Moldova signed an association agreement with the EU.

However, the president cannot cancel the association agreement, which was ratified by parliament.

On Sunday, Prime Minister Pavel Filip said the government and new president would need to work together, but added that Moldova’s path towards greater EU integration “cannot be reversed”. 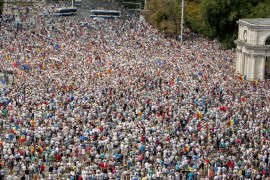 Demonstrators pitch around 100 tents in the capital Chisinau to demand president’s resignation over missing $1 billion. 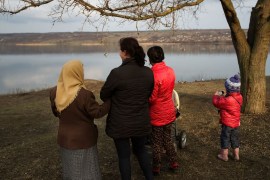