US president-elect Donald Trump said he planned to immediately deport or jail as many as three million undocumented immigrants, as he set out his priorities in the first television interview since his election.

The interview with CBS’s 60 Minutes was broadcast on Sunday, with millions tuning in for clues on how the billionaire businessman-turned-politician will govern the country.

Since Tuesday’s election triumph, Trump had appeared to tone down his rhetoric, notably suggesting he might be willing to reconsider a pledge to scrap President Barack Obama’s signature health reform, the so-called Obamacare.

He made clear, though, in excerpts of Sunday’s interview that he still intended to crack down on undocumented immigrants in the country, focusing on people with criminal records.

“What we are going to do is get the people that are criminal and have criminal records, gang members, drug dealers … probably two million of them, it could be even three … out of our country, or we are going to incarcerate them,” Trump said.

Trump’s stance on his deportation plans stood in opposition with comments by House Speaker Paul Ryan, who said on Sunday the focus under a Trump administration would be on securing the border, not rounding up immigrants.

Trump also said he would keep his promise to build a wall along the US border with Mexico, but said part of it could be a fence, as some members of Congress have suggested.

“There could be some fencing,” he said in the interview, but in other areas “a wall is more appropriate”.

Al Jazeera’s Mike Hanna, reporting from Washington DC, said there was no question about having a barrier on the border or not, but the discussion was about what form it would take as Trump had previously insisted it would largely be a physical wall, not a fence.

“The issue of a strong border is important for many Republicans, and indeed many Democrats. But the differences are as to what form it takes. There are already fences in large areas of the border at present, which the Congress approved,” Hanna said.

“If Donald Trump wants to get his wall, he needs the Republican-majority Congress to approve the expenses for it. He alienated many there during his campaign.”

Separately, 50,000 people in the US have signed a petition asking Trump to openly reject hate and bigotry.

It was set up following more than 200 reports of intimidation and harassment since election day. Some of those cases have been highlighted on social media.

Trump’s campaign was marked by derogatory comments about race, religion, gender and disability.
However, in his victory speech, he vowed to be a President for “all Americans”. 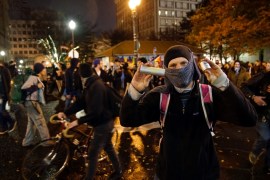 Portland activists say a grassroots movement is needed to keep president-elect’s policies from coming to fruition.