ISIL fighters have launched several fierce counterattacks against Iraqi forces on the eastern outskirts of Mosul city, underscoring the intense battle ahead as government troops and their allies push into densely populated neighbourhoods.

Iraqi officers told the AFP news agency that fighting was also under way in the adjoining Arbajiya area.

“The fighting is intense this morning. We’re trying to fortify our positions in Arbajiya before continuing our attack into al-Bakr,” Colonel Muntadhar Salem, of the counterterrorism unit, said.

Salem later clarified that the aim was to surround the al-Bakr neighbourhood, but not to assault it for now.

To the south of the city, militarised Iraqi police said they had come within 5km of Mosul’s airport, which satellite images show has been heavily fortified by ISIL.

The images, taken earlier this month by US-based private intelligence firm Stratfor, showed ISIL fighters having cleared terrain and levelled buildings around the airport and a nearby former military base on the west bank of the River Tigris.

Rows of concrete barricades, earthen mounds and rubble could be seen blocking key routes into the city centre.

Thousands of Iraqi regular troops and special forces, Shia militias, Kurdish Peshmerga, and other groups in an alliance of 100,000 fighters.

The nearly four-week campaign that began on October 17 to drive ISIL, or the Islamic State of Iraq and the Levant group, out of the biggest city under its control is also backed by thousands of western personnel on the ground and US-led air power, including fighter jets and Apache helicopters.

The International Organization for Migration said on Saturday more than 49,000 people had been displaced since the operation began.

In recent days the advance has slowed as they fight their way into densely populated neighbourhoods, with the urban landscape making defence easier for ISIL.

Iraqi armed forces do not release casualty figures, but field medics have noted that dozens have been killed and wounded.

Winning back Mosul would be a major blow to ISIL’s self-declared caliphate. In a rare audio message released earlier this month, ISIL leader Abu Bakr al-Baghdadi – whose whereabouts are unknown – said there could be no retreat in a “total war” against the forces arrayed against ISIL, telling fighters they must stay loyal to their commanders.

In a brief published on Friday, the UN’s human rights office said ISIL carried out a series of executions and abuses and that 40 people had been killed by the armed group for “treason and collaboration” with Iraqi forces and their allies closing in on the city.

Dressed in orange jumpsuits, the bodies of the victims were hung from electrical poles in several areas around Mosul, the UN said.

As street battles raged deeper into the city, civilians – some of them carrying white flags – walked towards the city’s outskirts.

Meanwhile, the UN warned of a possible exodus of hundreds of thousands of refugees from Mosul, which is still home to as many as 1.5 million people.

The World Health Organization said it has set up 82 “rapid response teams” to manage risks of epidemics, chemical exposure, and other health worries among people fleeing Mosul.

The UN health agency said water and sanitation in camps for displaced people could “face disruptions” as the numbers of those fleeing Mosul grew, raising the risk of food and water borne diseases such as cholera. 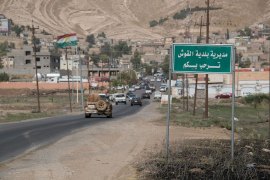 A deserted sanctuary near Mosul’s frontlines

Saint Hormizd Monastery overlooks the Ninevah plains, where Iraqi forces are locked in battle with ISIL. 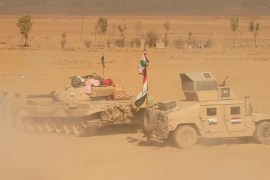