US President Barack Obama and his successor, Donald Trump, have met at the White House, a day after the New York businessman was declared the winner of the country’s election.

“We now are going to want to do everything we can to help you succeed because if you succeed, the country succeeds,” Obama told Trump.

The two men, who have been harshly critical of each other for years, were meeting for the first time, Trump said.

READ MORE: What powers will Trump have as president?

“I have great respect [for Obama],” he said. “The meeting could have, as far as I’m concerned, gone a lot longer.

“We discussed a lot of different situations, some wonderful, and some difficulties.”

Trump said he looked forward “to dealing with the president in the future, including counsel” and meeting with Obama “many, many more times”.

Throughout the election campaign, Obama had criticised Trump as unfit to serve as commander-in-chief.

Trump, on the other hand, spent years challenging the legitimacy of Obama’s presidency, falsely suggesting that he may have been born outside the US.

But at least publicly, the two men appeared to put aside their animosity.

As the meeting concluded and journalists scrambled out of the Oval Office, Obama smiled at his successor and explained the unfolding scene.

Later on Thursday, Josh Earnest, White House spokesperson, said: “President Obama came away from the meeting with renewed confidence in the commitment of the president-elect to engage in an effective, smooth transition.”

Trump and Obama did not resolve their differences, Earnest said, but based on their agreement on the need for an effective transition, “the meeting might have been at least a little less awkward than some might have expected”.

If Trump makes good on his campaign promises, he will wipe away much of what Obama has done during his eight years in office.

Trump, who will govern with Congress fully under Republican control, has pledged to repeal Obama’s signature health-care law and dismantle the nuclear accord with Iran.

The anticipated show of civility at the White House contrasted with post-election scenes of rallies across a politically divided country, as thousands of people took to the streets in several US cities on Wednesday to protest against Trump’s surprise victory.

Demonstrators in several US cities vented against the election’s winner, chanting “Not my president”, burning a papier-mache Trump head, beating a Trump pinata and carrying signs that said “Impeach Trump”.

Similar protests and vigils were planned for Thursday.

Trump also met House of Representatives Speaker Paul Ryan on Thursday.  After the meeting with his fellow Republican, with whom he was at odds during his campaign, he said that after his inauguration he will work very rapidly on issues like healthcare and immigration.

Speaking in Ryan’s office, Trump said: “We are going to lower taxes, as you know.”

He went to say: “I think we are going to do some absolutely spectacular things for the American people.”

Trump travelled to Washington from New York on his private jet, breaking with protocol by not bringing journalists in his motorcade or on his plane to document his historic visit to the White House.

Trump was harshly critical of the media during his campaign and for a time banned news organisations from his events. 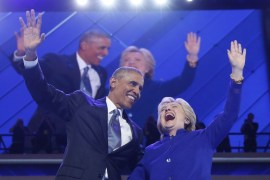 Obama: Clinton most qualified to be next US president

US president tells Democratic convention party’s nominee has experience and skills for the “demands of the Oval Office”.