Senior members of the Democratic Party have said that FBI director James Comey might have broken the law after he called for a probe into emails potentially tied to presidential candidate Hillary Clinton only days before the US election.

Comey set off a political firestorm late last week after announcing that the FBI would  investigate newly discovered emails related to Clinton.

The FBI found the emails on computers it seized during an investigation into lewd messages Weiner is accused of sending to an under-aged girl.

Nevada Democrat Harry Reid  wrote a stinging letter to Comey on Sunday suggesting that he may have broken the Hatch Act by informing Congress of the new emails. The Hatch Act prohibits FBI staff from using their position to influence an election.

“Your actions in recent months have demonstrated a disturbing double standard … with what appears to be a clear intent to aid one political party over another,” Reid said, adding that through Comey’s “partisan actions, you may have broken the law”.

“To throw this in the middle of a campaign 11 days out just seems to break with precedent and be inappropriate at this stage,” Podesta told CNN’s State of the Union show.

The FBI had said in July that its investigation into Clinton’s email practices had concluded with a recommendation of no criminal charges in the matter.

Meanwhile, President Barack Obama said he did not believe Comey was secretly trying to influence the election outcome.

White House spokesman Josh Earnest also said he had no “independent knowledge” of how Comey had arrived at his decision to make public the FBI email investigation or “what factors were considered” in his decision to discuss the issue publicly.

However, Michael Hayden, a former director at the CIA, said Clinton bore responsibility for having used a private email server when serving as US secretary of state.

“The original email set-up was the sin,” he told Al Jazeera. “Anyone with government experience views that email arrangement to be frankly inconceivable and all the subsequent explanations of it to be incoherent. Now we’re here in this dark place.”

“This might encourage Trump supporters who had been thinking about staying home because they thought the race was lost. Following this announcement they might now go out and vote,” she said.

Republican presidential nominee Donald Trump has used the FBI announcement to attack his rival on the campaign trail.

On Monday he called Clinton a threat to the country, saying that if she is elected a probe into her emails could shadow her entire term in office.

“The investigation will last for years. The trial will probably start,” Trump told a rally in Grand Rapids, Michigan. “Nothing will get done. I can tell you, your jobs will continue to leave Michigan. Nothing’s going to get done.”

During a campaign rally in battleground Ohio, Clinton accused the FBI of having jumped into the election “with no evidence of any wrongdoing with just days to go”. She said that if the bureau wants to look at the emails, “by all means, they should look at them”.

But she insisted that the FBI would reach the same conclusion it did earlier this year, when it declined to recommend Clinton and her advisers face charges for how they handled classified information.

In an average of national polls, Clinton is leading Trump at 48.0 to 44.9 percent. 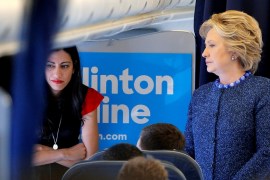 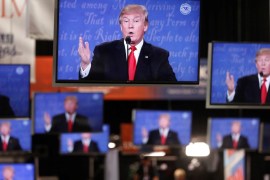 Donald Trump’s war on the media

Attacks on media from US politicians is nothing new, but the Republican candidate is taking the hostility to new levels.