Turkey’s prime minister has shrugged off European Union criticism over media freedom in the country, following the detentions of at least 13 senior staff members of a national newspaper.

In a televised speech to his party’s legislators, Binali Yildirim said on Tuesday that Turkey will not be taught lessons by Europe, and the government will “protect press freedom until the end”.

Monday’s detentions of the chief editor, columnists and a cartoonist at one of Turkey’s oldest newspapers, Cumhuriyet, sparked an international outcry, including from the EU and the United States.

European Parliament President Martin Schulz called the detentions on Twitter “yet another red line crossed against freedom of expression in Turkey”.

.@cumhuriyetgzt isn’t just any other independent newspaper: it’s the oldest secular newspaper in the country, an institution of the Republic

Referring to Schulz’s comments, Yildirim said Turkey will not give in to threats and argued that the issue of media freedom is being used by the EU to try to limit Turkey’s steps in combating terror.

“Brother, we won’t take notice of your line. The nation draws the red line for us. What importance does your line have? We’ll draw a line over your line,” Yildirim said. “They keep putting press freedom in front of us whenever we take steps in combating terror.”

The Istanbul prosecutor’s office said the detentions follow an investigation into the left-leaning and secularist paper’s alleged support to the movement led by US-based cleric Fethullah Gulen, who is accused by the government of masterminding the July 15 coup attempt, as well as the outlawed Kurdistan Workers’ Party, or PKK.

Yildirim said there are two dimensions to the investigation: one based on a procedural complaint filed at the newspaper’s corporate body and the other “a prosecution that began with the charge of supporting terror without being a member of terrorist organisations”.

The paper, known for its critical stance towards the government, rejected the allegations and Tuesday’s edition ran the headline: “We will not surrender”.

The columns of two of its detained writers were left blank.

Ayse Yildirim, a columnist at Cumhuriyet, who is not related to the prime minister, told the Associated Press news agency that the newspaper would continue to publish blank columns until its managers and writers are released.

“International reaction has been very important,” she said, adding: “I think these reactions will continue and they will stand by us as this may be an issue of democracy for Turkey but we are facing an issue that concerns the whole world.”

On Monday, hundreds gathered outside the newspaper’s Istanbul headquarters on Monday to protest against the detentions as Turkey’s crackdown on critical media widens.

Demonstrators and opposition parties said they will continue the vigil until the detained are released.

Since the failed coup attempt, authorities have arrested close to 37,000 people and more than 100,000 people have been dismissed or suspended from government jobs in a purge aimed at eradicating Gulen’s network. At least 170 media outlets have been shuttered and 105 journalists arrested, according to the Turkish Journalists’ Association.

The government has also appointed trustees to companies with alleged connections to Gulen, as well as at least 28 municipalities with suspected ties to the cleric and the PKK.

Turkey’s prime minister also said his government could consider proposing a measure for a “limited” reinstatement of the death penalty amid public demands that the plotters of the failed coup attempt be executed.

He added, however, that the measure will not be “retroactive” and cannot apply to the coup plotters.

President Recep Tayyip Erdogan has repeatedly said he will ratify the bill on capital punishment. 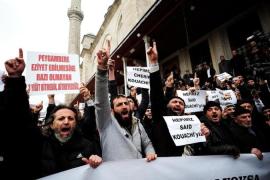