Republican nominee Donald Trump won the presidential race in the US state of Indiana, which holds 11 electoral votes.

Trump won 62 percent of the vote in the state while Democratic candidate Hillary Clinton got won 34 percent.

The Libertarian candidate Gary Johnson got 4 percent of the vote.

Indiana is in the midwestern and Great Lakes regions of North America and has long been considered a Republican stronghold, particularly in presidential races.

In 2000 and 2004, George W Bush won the state by a wide margin while the election was much closer overall.

The state has only supported a Democrat for president five times since 1900.

In 2008, Democrat Barack Obama narrowly won the state against John McCain 50 percent to 49 percent but in the following election, Republican Mitt Romney won back the state for the Republican Party with 54 percent of the vote over incumbent Obama, who won 4 percent. 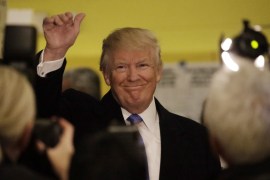 US election: Trump hints at refusing to accept result

As Americans vote, Republican hopeful says he wants to “see everything honest” regarding the final outcome.