Hillary Clinton, the US Democratic nominee, has overwhelmingly won the vote in a tiny Pacific island which has correctly predicted the outcome of the presidential election for the last 32 years.

Guam, whose residents are American citizens, holds a general election poll every four years, even though it has no members in the Electoral College.

But while the result of Guam’s presidential poll has no bearing on the national election, it may be an indicator of how the rest of the country will vote: Residents of the West Pacific Island, which has a population of 162 000, have correctly chosen the winner of each presidential election since 1980.

INTERACTIVE: US Election – Who got the right to vote when?

According to the results announced by local media, Clinton received 71.63 percent of the vote, while Trump received 24.16 percent.

Residents of US territories including Puerto Rico, Guam, American Samoa and the US Virgin Islands – nearly 4.1 million people in total – do not have representation in the Electoral College or in the US Congress. 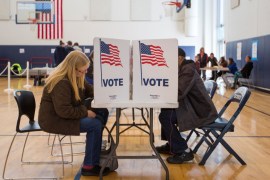 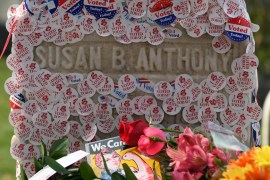 ‘I Voted Today’: Paying tribute to Susan B. Anthony

After casting their ballots, voters head to New York cemetery in order to pay respects to Susan B. Anthony.