On Tuesday, November 8, Americans will decide whether Republican Donald Trump or Democrat Hillary Clinton will be handed the keys to the White House.

The first polls will close at 6pm EST in Indiana and Kentucky and the last, in Alaska, at 1am EST. In between, results will trickle in, state by state.

If Trump wins three of these five states, it will be an early indication that we are in for a long night on Tuesday. If he wins four or five, then Clinton is in big, big trouble.

If Clinton wins three of these five states, she’s in good shape as the midwestern USA polls close. If she wins four or five, she will almost certainly win the election.

First, and most importantly, these states are all in the eastern time zone of the US which means their polling places are among the first to close. They will be early indicators of which way the election is going before the other polls close.

Second, they collectively have a lot of electoral votes and have gone in both directions over the past 30 years.

Remember, the winner of this election is not the one who wins the popular vote. It’s the candidate that wins the most electoral votes. You can do your own electoral vote math at 270towin.com

Other states to watch: Maine, Wisconsin, Michigan, New Hampshire, Arizona, Colorado, Iowa and Nevada. Races are close in all these places and if the electoral vote count is tight, the candidates will need these states. Arizona, with 11 electoral votes, could be key.

Not a close race:

Here are the states expected to be no contest, which means the electoral votes are a given:

Georgia and Texas are closer races than Republicans would like but it’s doubtful they’ll go Democrat and the fact that Clinton has spent no time there means she knows it, too.

Wild card: Utah. It could be the only state that goes for a third-party candidate and that would most likely benefit Clinton since Utah is traditionally a Republican state. 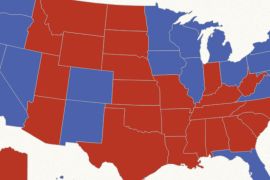 Donald Trump vs Hillary Clinton: How to read US polls 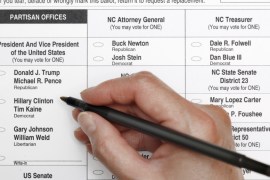 Americans will cast their ballots for a new president, but the electoral college will make the final decision.