China effectively barred two elected pro-independence MPs from Hong Kong’s legislature after they deliberately misread their oaths, saying that they could not now be sworn in again.

An oath that did not conform to Hong Kong’s law “should be determined to be invalid, and cannot be retaken,” the Communist-controlled National People’s Congress (NPC) in Beijing said on Monday.

At the swearing-in ceremony, both modified their oaths in an act of defiance by using a derogatory word for China. Yau also slipped in an expletive.

Hong Kong’s legislature descended into chaos after the two lawmakers defied a barring order and barged into the chamber as democrats formed a human chain around them, forcing the session to be adjourned last month.

The NPC declared legislators had to be “sincere and solemn” when taking their oaths, and had to pledge “completely and solemnly” to uphold the Basic Law of Hong Kong as part of the People’s Republic of China.

The question has become hugely sensitive in Hong Kong, the former British colony which returned to Chinese rule in 1997 under a promise of “one country, two systems” and where fears of increasing encroachment by Beijing have been rising, prompting mass protests two years ago.

Beijing sees any talk of independence as treasonous and the official Xinhua news agency quoted a spokesman for the government’s Hong Kong and Macao Affairs Office welcoming the ruling.

“The interpretation demonstrates the central government’s firm determination and will in opposing Hong Kong independence,” the spokesperson said, adding that it “complies with the common aspiration of the entire Chinese people, including the compatriots in Hong Kong”.

Al Jazeera’s Sarah Clarke, reporting from Hong Kong, said it was not a surprise to see the ban being implemented in Hong Kong.

“The Hong Kong chief executive initiated the High Court action, doing exactly what the NPC has done this morning. He wants them disqualified,” she said.

“China has intervened on five separate occassions but this is very rare as the interpretation has come ahead of a court ruling in Hong Kong. This has angered the people in Hong Kong. A lot of people may not support independence, but their concern is that China is disqualifying two MPs who were democratically elected.”

On Sunday, street battles erupted as thousands in Hong Kong protested China’s intervention in the dispute.

Scuffles broke out and police pepper-sprayed some demonstrators as they marched from Wan Chai district to the city’s Central financial district, with several hundred pressing on to Beijing’s Liaison Office – where demonstrators charged metal fences set up by police.

“This is outrageous,” said Jay, a 21-year-old student who wore a mask to protect against the pepper spray.

“The Chinese government is destroying Hong Kong’s judicial independence. It’s an attempt to control what we think. Even people who are against independence are coming out against this.”

Li Fei, the chairman of the Basic Law Committee of the NPC Standing Committee, told reporters: “These Hong Kong independence figures are going against the country and splitting the country. How can they uphold Hong Kong’s Basic Law?”

“I hope people can see the real face of these people,” he added. 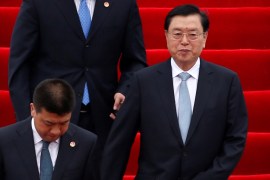 Thousands of security personnel mobilised, as a high-ranking politician arrives in the city amid anti-China sentiment.