The US-backed Syrian Democratic Forces (SDF) have declared their intention to launch an assault on ISIL-held Raqqa.

The SDF, an umbrella group comprising Kurdish and Arab rebel groups fighting in Syria, said at a news conference on Sunday the offensive to reclaim the de facto capital of Islamic State of Iraq and the Levant (ISIL, also known as ISIS) would begin on Saturday.

In the news conference in Ayn Issa, northern Syria, it was announced that rebel fighters would “continue [their offensive] until all objectives are met, namely, seizing and toppling the capital of ISIL”.

“On this occasion, we call on the international community and regional forces to coordinate and take part in the operation to exterminate ISIL,” an SDF official said before announcing the US would offer air support in the offensive.

“We also call on international humanitarian and relief agencies to perform their duties for the people in Raqqa after the city has been liberated.”

The official said 30,000 fighters would take part in the offensive, dubbed the “Euphrates Shield” operation.

The fighters called on civilians to stay away from areas in which ISIL fighters are known to be, and to try to run to “liberated” areas of the country.

The announcement came as the Iraqi government and Iraqi Kurdish Peshmerga forces, with the help of the US-backed coalition, continue a bloody battle in Iraq to retake Mosul.

The Syrian Kurdish People’s Protection Units (YPG) – which had already dealt ISIL several defeats, including seizing the key border town of Tal Abyad – forms the backbone of the alliance.

The Raqqa Falcons Brigade, a 1,000-strong Arab force whose fighters all hail from Raqqa, is expected to be a key component of the fight for the city.

“When it comes to Raqqa, we want a force that ultimately liberates Raqqa that is primarily from the local area. We have trained many of these fighters and that force will continue to grow as we get to the subsequent phases of that campaign,” Brett McGurk, the American official leading the fight against ISIL, told a news conference in Jordan.

“We work closely with the Syrian Democratic Forces. When they are fighting Daesh [ISIL], we do provide air support. So that will continue as they move south against Daesh positions north of Raqqa.”

US Defense Secretary Ashton Carter warned on Sunday that the fight to wrest control of Raqqa from ISIL would “not be easy”.

The US considers the YPG to be the most effective force against ISIL in Syria, but Turkey views it as a “terror” organisation and claims it’s linked to Turkey’s outlawed Kurdish group, the Kurdistan Workers’ Party (PKK).

Turkish officials including President Recep Tayyip Erdogan have said they will not accept a role for the Kurds in the liberation of Raqqa.

Al Jazeera’s Mohammed Adow, reporting from Gaziantep on Turkey’s border with Syria, said although the SDF called on international forces to assist the offensive, it has made it clear it does not want Turkish military involvement.

“Who will participate with the SDF [in the assault on Raqqa] remains to be seen,” he said before adding that the Turkish military has been weary of the mainly Kurdish SDF, preferring to ally with the Free Syria Army (FSA) instead.

Andreas Krieg, a researcher at the Near East Centre for Security and Strategy at King’s College London, told Al Jazeera that “Turkey did not want the YPG [Kurdish People’s Protection Units] or the SDF to take more control of land [in Syria], which is why their military got involved there in the first place”.

Krieg added that rebel forces were 40 to 50km outside Raqqa, and there were many towns and villages along the way.

“It is unlikely that the SDF would be able to fight this battle alone,” Krieg added. “But it remains to be seen who, whether the FSA, Syrian government forces, or any international forces, will participate.”

There was no immediate comment from Turkey on the Kurdish announcement.

Turkey launched an operation inside Syria on August 24 alongside allied rebel forces who have managed to retake the ISIL stronghold of Jarabulus and the symbolically important town of Dabiq.

But one of the operation’s goals is also to check the advance of Syria’s Kurds, and Turkish forces have carried out air strikes against YPG positions. 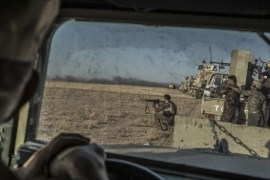 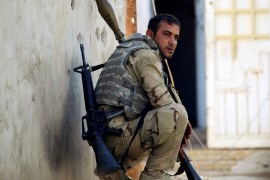 Iraqi special forces meet resistance from ISIL fighters who attack in the east with a ferocious counter-assault.