Donald Trump’s wife, Melania, has made a rare appearance on the campaign trail, as both presidential candidates rallied in vital swing states in a last-minute search for votes.

Delivering a get-out-the-vote speech in the Philadelphia suburbs on Thursday, Melania Trump pledged to focus on combating online bullying and campaigning for women and children if her husband is elected to the White House.

Her description of the perils of social media seemed at odds with her husband’s divisive and bullying rhetoric throughout the campaign.

“Our culture has gotten too mean and too rough, especially to children and teenagers,” she said. “It is never OK when a 12-year-old girl or boy is mocked, bullied or attacked” in the school yard, she argued, but it is “absolutely unacceptable when it is done by someone with no name hiding on the internet.”

The highly personal speech, which also touched on conversations with her young son, her marriage and her own experience as an immigrant from Slovenia, appeared aimed at humanising her husband in front of an audience of suburban women who are critical to Trump’s hopes in Pennsylvania and other key states.

Thursday’s speech was Melania Trump’s first since she addressed the Republican National Convention in July. That speech was well-received initially, but was quickly overshadowed by the discovery that sections had been plagiarised from First Lady Michelle Obama’s address to the 2008 Democratic National Convention.

Mrs Trump’s appearance comes as polls suggest the race for the Oval Office has tightened in the past week.

EXPLAINED: How the electoral system works

According to the Reuters/Ipsos States of the Nation project, several swing states that Trump must win have shifted from favouring Hillary Clinton to toss-ups, .

The project, a survey of about 15,000 people each week in all 50 states plus Washington, DC, found the two candidates were now tied in Florida and North Carolina and that Clinton’s lead in Michigan had narrowed so much that the state was too close to call. Ohio remained a dead heat, with Pennsylvania now tilting to Clinton.

An average of polls compiled by the RealClearPolitics website gave her a lead of 1.7 percentage points on Thursday, well down from the solid advantage she had until late last month.

However, in the complex US election system, more important than the popular vote is the outcome in the electoral college vote – which major pollsters still predict will result in a Clinton win. 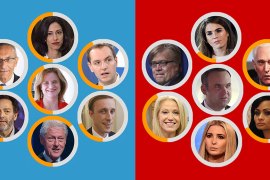 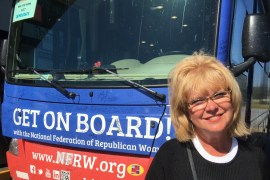 Republicans say telling women they should select a president based solely on gender, not her ideas, is sexist.