Tal Kayf, outskirts of Mosul – In his small barber shop in Tal Kayf, around 20km northeast of Mosul,  Mahmoud Fadil was excited to see all the seats occupied by teenage boys and men waiting for a haircut.

As he sliced his scissors through the hair of one of his clients, Fadil, 43, spoke of how his business has boomed since the Peshmerga pushed fighters of the Islamic State of Iraq and the Levant (ISIL) group, out of the town.

“I haven’t had so many customers in one day for the last two years,” Fadil said. “I am now helping the men in town to redesign their beards if they wish to have one, and this is something I stopped doing while ISIL controlled Tal Kayf.”

ISIL, also known as ISIS, took control of the town following heavy fighting with the Peshmerga forces in August 2014. Fadil chose not to leave his village afterwards.

“I did not want to lose everything,” he said. “I stayed here, but that was not a very wise decision. I could not do my job properly. If ISIL caught me shaving a man’s beard, they would cut one of my fingers.”

In the main square of Tal Kayf, men and teenagers gathered and greeted each other. Many of them, who fled after ISIL’s takeover of the town, had just returned home.

“When they took our town, anyone could be easily accused of spying for the Peshmerga or Iraqi forces, and especially if this person had a mobile [phone],” an elderly man standing in the square, who did not provide his name, told Al Jazeera. “When they came to our town, they confiscated everything.”

Tal Kayf, with an estimated population of 22,000 in 2010, has witnessed many demographic changes over the past century and is now home to Chaldean Christians, Assyrian Christians, Muslim Sunnis and Yazidis.

On October 23, Peshmerga forces advanced to Tal Kayf and successfully pushed ISIL out, allowing families who fled to return home.

READ MORE:  ISIL pushed out of town near Mosul as advance continues

Aziz Ghazi, 37, was flogged by ISIL when he was caught selling cigarettes.

“They banned cigarettes and threatened to punish anyone who sells or smokes tobacco. At first, I thought they wouldn’t do it; smoking is much of a habit for Iraqi men,” he told Al Jazeera.

Ghazi owned a small grocery store, where he used to sell the tobacco and cigarettes. “One day, three of them [ISIL] came to the store. They dragged me out and took me to the main square, where they read what they called a verdict against me for selling tobacco. I was sentenced to receive nine lashes and three days in prison. They punished me in front of the men and boys in town.”

They electrocuted him. They wanted him to confess that he is cooperating with the Peshmerga.

According to Ahmed, a cattle farmer from Tal Kayf, this was not the only case of public punishment enforced by ISIL in Tal Kayf. “They [ISIL] made sure to execute all punishments in public places.”

Fadlie, a town about 10km northeast of Mosul with an estimated population of around 4,500, was also recently retaken from ISIL.

“They came to our house one day and took our only son for no obvious reason,” said Ferhad Assim, 54. “When they took him, we begged them to spare his life. His mother poured sand on her head [considered a sign of mourning in some Iraqi villages]. We thought they would kill him.”

ISIL returned their son home to his parents within three days, after torturing him. The armed group accused him of cooperating with the Peshmerga.

“They electrocuted him. They wanted him to confess that he is cooperating with the Peshmerga. But my son was only a university student before ISIL took our town; he has no connection with any military or political sides,” Assim said. “They did not kill him, but he still has the scars of lashing on his back.”

Ghazwan al-Dawoody, a member of the local council representing the Shabak minority, told Al Jazeera that while adults suffered the most under ISIL’s control, children were also gravely affected by the conflict.

“Most of the newborn [babies] haven’t received any vaccination, and this poses a major threat to their wellbeing,” Dawoody said. “But the main issue remains the children who skipped school for almost two years. Families refused to send their children to schools under ISIL, because there was no real education delivered to children.”

The words “Islamic State” are still visible on the walls of the former ISIL headquarters in Fadlie. On the floor, the armed group left behind copies of what appeared to be an ISIL-published newspaper called Al Nabaa News.

“But they have left more than that,” added 49-year-old resident Seif Maarouf. “They left wounds that will not easily heal. Speaking of life under ISIL is one thing, and living it in reality is another thing.” 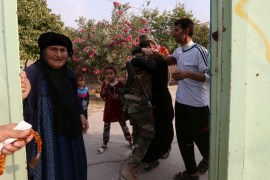 ISIL pushed out of town near Mosul as advance continues 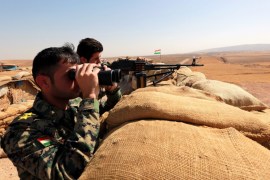 Kurdish soldiers seek to seize Bashiqa, where Turkish troops are stationed, amid talks over a Turkish role in operation.