Venezuela’s opposition has suspended a “trial” and a planned mass march against President Nicolas Maduro, in advance of talks next week aimed at easing the country’s political crisis.

The decision, adopted by the opposition-led National Assembly to put off its proceedings against Maduro on charges that he has been derelict in his constitutional duties, was not “capitulation”, Henry Ramos Allup, the Speaker, said on Tuesday.

Instead, he said, it showed the opposition’s desire to seek a solution to the crisis through the talks with the government set to begin on November 11.

The protest march on Maduro’s presidential palace that had been planned for Thursday would also be postponed, he said.

The trial of Maduro was merely symbolic as it would not lead to any result, given that the constitution does not allow for such a process against the president.

Maduro himself had dismissed the effort as invalid and an attempt to overthrow his government, and threatened to throw participants in jail.

“I welcome … the fact that the opposition has made sensible decisions. I welcome that,” he said on his weekly TV show.

“And I shook hands with [Jesus] ‘Chuo’ Torrealba. I did not like him at all, and now I like him. He’s nice.”

Torrealba is the leader of the opposition coalition, the Democratic Unity Roundtable (MUD).

Maduro’s government had made gestures towards the opposition before the negotiations, made possible through mediation by the Vatican and the Union of South American Nations.

It released five opposition members from prison on Monday.

The opposition called for the release of more “political prisoners”, but it also showed signs of coming to terms with a decision by the electoral authorities last month to halt its drive for a recall referendum aimed at removing Maduro.

Relieving pressure on Maduro indicates that the opposition sees the negotiations as its best option rather than a test of its ability to rally the public to its side.

A home for Sofia: A single mother’s struggle in Caracas

Maduro’s approval ratings are rapidly decreasing, as many Venezuelans blame their dire situation on the president, whose current term is set to end in 2019, and his decision to maintain socialist policies launched by his late predecessor Hugo Chavez.

The country is also  feeling the sharp fall in the price of oil, Venezuela’s main resource.

Venezuelans have been lining up for basic goods as they struggle with chronic shortages of food, power and proper medical care on top of runaway inflation. 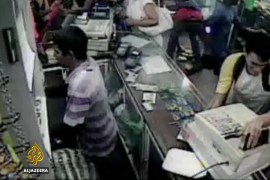