Russian President Vladimir Putin has offered a new humanitarian pause in Syria’s Aleppo, urging opposition fighters to use it to leave the besieged eastern districts.

Russia’s defence ministry said Putin ordered that the aid corridors – which Russia had opened earlier – will also be open on Friday, for longer hours, from 9am to 7pm, along with two new exit routes for the fighters to leave eastern Aleppo.

The ministry announced Putin’s new gesture in a statement on Wednesday.

The statement said that the exits will be open on Friday for both civilians and rebels “in order to prevent a senseless loss of life”.

It also said that the opposition offensive on the Syrian government-held districts in western Aleppo that was launched last week had failed to break through the siege.

Elaborating on the developments from Moscow, Al Jazeera’s Rory Challands said two humanitarian corridors would be set up and the Syrian army would pull back, allowing the fighters to leave eastern Aleppo.

“The unusual thing about this statement is that the Russian defence ministry appealed to the rebels directly,” he said.

“The Russians are saying, ‘Your offensive on western Aleppo has been unsuccessful. Syrian government forces have beaten you back. And now is time to leave’, giving them 10 hours to do so.”

Humanitarian pauses in the past have been largely unsuccessful, both in getting aid into eastern Aleppo and getting residents out of the city, our correspondent said.

Fighters launched a major assault on Friday, backed by car bombs and salvos of rockets, to break through government lines and reach the 250,000 people besieged in Aleppo’s east.

Since then, opposition factions have amassed on Aleppo’s western outskirts in a bid to end Bashar al-Assad government’s three-month encirclement of the city’s eastern districts.

Aleppo has been hit by some of the worst violence in Syria’s five-year conflict, turning the once-bustling economic hub into a divided and bombed-out symbol of the war. 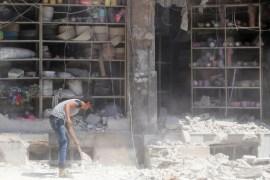 Syria’s war: Calls for truce to get aid into Aleppo

UN envoy says “truce can save lots of lives” as fighting between Syrian forces and rebels rages on in Aleppo and Hasaka. 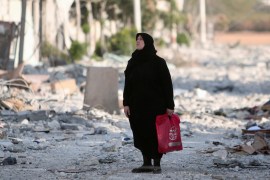 Moscow says supports plan for 48-hour truce in battered city but lays out conditions before any agreement can take hold.