Thousands of Yemenis, many of them armed, gathered at the United Nations headquarters in Yemen’s capital Sanaa demanding for an international investigation into deadly air strikes on a funeral.

Radios and mosque loudspeakers throughout the city played mourning verses on Sunday as demonstrators crowded the streets around the UN headquarters, many waving their rifles in the air and carrying flags and placards.

The protest comes as deposed Yemeni leader Ali Abdullah Saleh called an alliance of his supporters and Houthi fighters to take in reinforcements, and urged them to get armed and head to the border with Saudi Arabia.

The attack that killed at least 140 people on Saturday hit a hall where rows of the city’s notables had gathered for the funeral of the father of the Interior Minister of the Houthi group’s self-declared government.

The Arab coalition, formed by Saudi Arabia, has denied any role in the incident, believed to be one of the deadliest strikes in the 18-month war in which at least 10,000 people have been killed.

“The coalition will immediately investigate this case along with Joint Incidents Assessment Team in Yemen and experts from the United States who participated in previous investigations,” it said in a statement carried by the Saudi Press Agency on Sunday.

The attack has been condemned by the UN, the European Union and the US.

Pictures showed the inside of the once ornate hall reduced to a pile of twisted metal and rubble after two huge explosions.

Nada, a high school pupil living near the site said body parts propelled by the explosion flew into her house.

“What happened was an unprecedented crime … The sight of it was terrifying and will never leave my mind,” she said.

The coalition has launched thousands of air strikes against the Shia Houthis, who Saudi and its Arab Gulf allies fear are a proxy for Iran.

In another sign that the attack may escalate already raging regional tensions, Iran’s main ally in the Arab world commiserated with the Houthis and condemned Saudi Arabia.

“I say to [Yemen’s] people: you will ultimately triumph,” Hassan Nasrallah, leader of the armed Lebanese group Hezbollah, said on Saturday.

“Your noble revolutionary blood will triumph over the sword of those blood-thirsty savages.”

In an interview with Al Jazeera before the deadly incident on Saturday, Abdulmalik al-Mekhlafi, foreign minister of the exiled Yemeni President Abd-Rabbu Mansour Hadi, blamed the violent standoff on the Houthis and former leader Saleh.

“The problem is not on our side. It’s on the other side,” he said.

“Now, the international community has to force the Houthis to accept peace. Otherwise, the government will proceed militarily with its plans to subdue them.” 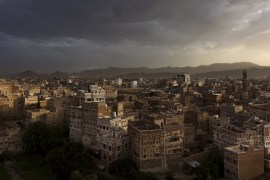