Pakistan’s parliament has unanimously passed legislation against “honour killings” – mandating life imprisonment, 25 years in prison, for convicted murderers even if the victim’s relatives forgive them.

The legislation was approved on Thursday in a joint session of the lower and upper houses of parliament, three months after an outspoken social media celebrity, Qandeel Baloch, was strangled by her brother.

“This is a step in the right direction,” women’s activist and columnist Aisha Sarwari told AFP news agency. “We should take our little wins where we get them and proceed forward and not retreat.”

But rights activist Farzana Bari was more cautious, saying the bill still allowed a judge to decide whether a murder qualified as an “honour killing” or not.

Only about one-third of the 446 legislators attended the session, but debate was raucous.

Conservative Senator Hafiz Hamdullah said parliament should instead address elopements by women, claiming 17,000 had done so since 2014.

“Why don’t we see what are the reasons behind such killings? Why are girls eloping from their homes?” he said.

He told AP news agency later that the law was bringing Western-style independence for women.

“They are trying to impose Western culture over here. We will not allow [it],” he said. “We will impose the law that our holy Quran and Sunnah [tradition] say.”

About 500 women are killed each year in Pakistan at the hands of family members over perceived damage to “honour”, which can involve eloping, fraternising with men, or any other infraction against conservative values relating to women.

In most cases, the victim is a woman and the killer is a relative who escapes punishment by seeking forgiveness for the crime from family members.

Prime Minister Nawaz Sharif issued a statement hailing the passage of the bill and vowed police and courts would implement it.

“We will make … sure to fully enforce this legislation across the country,” he said.

“Women are the most essential part of our society and I believe in their empowerment, protection and emancipation.”

Al Jazeera’s Kamal Hyder, reporting from Islamabad, said it’s important to wait and see how the law will be implemented at the investigation level.

“There has been strong legislation in the past, but people have found loopholes,” he said.

“It will be interesting to see how quickly this one is enforced – how serious the government really is in trying to curb this menace.”

The assembly also passed a bill boosting the punishment for some rape offences, mandating DNA testing, and making the rape of a minor or the disabled punishable by life imprisonment or death.

Rape conviction rates are close to zero percent, largely because of the law’s reliance on circumstantial evidence and a lack of forensic testing.

Rights groups and politicians have for years called for tougher laws to tackle perpetrators of violence against women in Pakistan.

“We hope that these new laws will help to generate a cultural shift in Pakistani society and that women will be able to live their lives in safety,” Yasmeen Hassan from Equality Now told Reuters news agency. 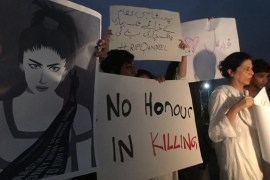 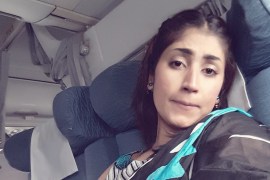 Pakistanis on Qandeel Baloch: The problem is society

Pakistanis express sorrow and anger after social media star is killed by her brother, but some condemn her lifestyle.