While Donald Trump and Hillary Clinton are among the most well-known figures in the United States, their running mates in the race for the White House are less familiar to American voters.

On Tuesday, in the year’s first and only vice-presidential debate, they got a chance to introduce themselves and make their positions clear.

Here is what you need to know about the two candidates:

Tim Kaine, 58, is active in the Senate on foreign relations and military affairs.

He has built a reputation for working across party lines as Virginia’s governor and as mayor of Richmond.

As she announced her choice for vice president, Clinton described Kaine as “a man who’s devoted his life to fighting for others”. She called him “a relentless optimist who believes no problem is unsolvable if you put in the work to solve it”.

Kaine himself has agreed with his critics that he is “boring”.

Before entering politics, Kaine was a lawyer who specialised in civil rights and fair housing.

He learned Spanish during a Jesuit mission trip to Honduras while in law school, an experience he still refers to on the campaign trail.

At times, his Catholicism has run up against his governing choices. After opposing gay marriage in his 2005 gubernatorial run, he later broke with the church to support it. He says he is personally against abortion but has consistently voted in favour of abortion rights.

He is particularly controversial among the left of the Democrats due to his opposition to bank regulation, his support of offshore drilling and fracking, and the Trans-Pacific Partnership – a major issue in the presidential campaign.

Supporters of the TPP say it will help global free trade; its detractors say it gives corporations supremacy over elected governments. Kaine now says, like Clinton, he no longer supports it.

Mike Pence, 57, has served as governor of Indiana since 2013 and also represented the state in Congress for more than a decade.

Before Trump chose him for vice president, he was facing a tough re-election battle, as a result of alienating both Republicans and Democrats in the state.

He is for lower taxes, slashing the social safety net, is sceptical of climate change and favours military interventions overseas.

Pence was raised a Catholic, but is now a Protestant evangelical. His signature line is: “I’m a Christian, a conservative and a Republican – in that order.”

He questions evolution, and recently signed into a law a requirement for foetal tissue to be buried or cremated after an early miscarriage or abortion. The law has been successfully challenged in court.

When Trump announced his choice, he said one of the reasons he selected Pence was to promote unity within the Republican Party.

Pence is seen as a fiscal and social conservative who can appeal to a broad span of voters in the party so that Trump can make himself more palatable to Republicans who have been wary of his candidacy.

Pence has disagreed prominently with Trump on a number of issues; he has spoken out against the Republican presidential candidate’s controversial call for a ban on Muslims entering the US and on trade deals. 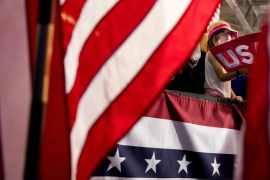