The United Nation’s humanitarian aid chief has described as “absolutely devastating” the sight of Yemeni children suffering malnutrition as a result of the country’s 18-month conflict.

That includes about 370,000 children enduring very severe malnutrition that weakens their immune system.

As he concluded a two-day visit in rebel-held Sanaa, the UN’s Stephen O’Brien said that he visited a hospital in the Red Sea city of Hodeidah, where he met “very small children affected by malnutrition”.

“It is, of course, absolutely devastating when you see such terrible malnutrition,” he said, hailing the efforts of relief agencies trying to meet the “very severe needs” for food in the country.

“We need to do more. We need to do everything we can to meet the very large scale of needs which are here in Yemen,” he said, in his first visit since August last year.

O’Brien also said the “very best humanitarian solution is that we see a political solution to this crisis”.

READ MORE: Who controls what in Yemen

The conflict between Yemen’s government and Houthi rebels escalated last year after the fighters captured the capital Sanaa and other territory, and a Saudi-led Arab coalition intervened militarily in support of President Abd-Rabbu Mansour Hadi.

The coalition has imposed a sea blockade on Yemen and conducts daily air strikes on areas under the rebels’ control. 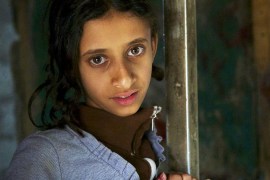