United Nations High Commissioner for Human Rights Zeid Ra’ad al Hussein warned Russia on Tuesday over the use of incendiary weapons in Syria’s besieged rebel enclave of eastern Aleppo, and said crimes by one side did not justify illegal acts by the other.

Hundreds of civilians have been killed or injured in air strikes since the collapse of the latest ceasefire and the Syrian government’s announcement last month of a Russia-backed offensive to retake Aleppo.

Repeated attacks on civilian infrastructure, including hospitals, have drawn international condemnation – and accusations of war crimes.

Zeid said that the situation in Aleppo demanded bold new initiatives “including proposals to limit the use of the veto by the permanent members of the Security Council”, which would enable the UN body to refer the situation in Syria to the International Criminal Court (ICC).

“Such a referral would be more than justified given the rampant and deeply shocking impunity that has characterised the conflict and the magnitude of the crimes that have been committed, some of which may indeed amount to war crimes and crimes against humanity,” he said in a statement.

Syria’s government and its allies had undertaken a “pattern of attacks” against targets with special protection under international humanitarian law, including medical units, aid workers and water-pumping stations, he said.

“As of yesterday, we had only six partially functioning hospitals that are in service, only one hospital that offers trauma services,” Chaib told the briefing.

READ MORE: This is why Aleppo matters

Russia is a key player in the Syrian civil war by virtue of its military support for President Bashar al-Assad and its role as one of five veto-holding powers on the Security Council.

The use of indiscriminate weapons such as incendiary weapons in heavily populated areas was of particularly grave concern, Zeid said, drawing a parallel with the battles of Warsaw, Stalingrad and Dresden during World War Two.

“I remind all State parties to Protocol III of the Convention on Certain Conventional Weapons, including the Russian Federation, that they are strictly prohibited from using incendiary weapons in air strikes on heavily populated areas, and that the use of such weapons by ground forces is severely restricted,” Zeid said.

The rebels’ use of inaccurate “hell-fire cannons”, homemade mortars that fire gas cylinders packed with explosives and shrapnel, was also totally unacceptable, he said.

Designating the enemy as a “terrorist organisation” was not an excuse to ignore the laws of war, Zeid said.

Zeid’s warnings came hours after the United States suspended talks with Russia over the conflict in Syria, accusing Moscow of not living up to its commitments under a ceasefire agreement.

The US government released a statement on Monday confirming the suspension of talks, following weeks of intense air raids on Aleppo carried out by the Syrian and Russian armies.

“The United States is suspending its participation in bilateral channels with Russia that were established to sustain the cessation of hostilities,” US State Department spokesman John Kirby said in a statement on Monday.

Earlier on Monday, Russian President Vladimir Putin had signed a decree to suspend an agreement with the US on disposing of weapons-grade plutonium, citing “unfriendly acts” by the US.

Russia’s foreign ministry said it regretted the US decision to suspend the talks, saying Washington was trying to shift responsibility for a failure to stop the violence on to Moscow.

“After failing to fulfil the agreements that they themselves worked out, they are trying to shift responsibility on to someone else.” 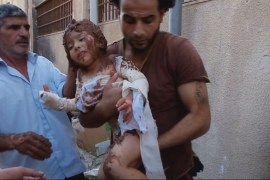 Video purports to show child in Homs treated with mud for burns sustained by what activists say were incendiary weapons.