Turkey has shut down a television station for allegedly “spreading terrorist propaganda” after the country extended the state of emergency declared following a failed coup d’etat in the summer.

IMC TV, known for its pro-Kurdish and liberal content, became the latest Turkish media organisation to be closed down on Tuesday after police raided the building and cut the broadcast live on air.

The channel was among several outlets ordered shut down since last week.

Banu Guven, a veteran journalist with the IMC TV, told Al Jazeera that the channel was switched off because it had touched on sensitive issues in Turkey.

“We reported on the Kurdish issue because it is probably the most challenging problem Turkey has been facing. As journalists, of course, we will have stories on this issue. But IMC TV is not only about this. We also reported on human rights, women’s rights, other minorities and the bans imposed on the society,” Guven said.

“There is no rule of law in Turkey under the state of emergency, so there are no tools to use against such unlawful accusations.”

Turkey’s state of emergency allows the government to adopt “executive orders”, which act as laws, without parliament approval.

One allows ministers to order the closure of media organisations, provided they are “threats to national security”. Dozens of outlets have been closed down since July.

The Cabinet of Ministers has extended the state of emergency for an additional 90 days, government spokesman Numan Kurtulmus said on Tuesday.

Emergency measures were imposed in July in the aftermath of a failed coup attempt that killed almost 300 people.

Turkey’s more than 30-year-old conflict with the outlawed Kurdistan Workers’ Party (PKK) reignited in the summer of 2015, after a ceasefire declared a year-and-a-half ago faltered and peace talks between the two sides collapsed.

PKK attacks on security forces have been frequent since then with the government launching military operations against the group in the southeast of the country.

PKK is considered a “terrorist” organisation by the United States and the European Union.

Turkey has also been hit by repeated bomb attacks blamed on Islamic State of Iraq and the Levant (ISIL, also known as ISIS) in recent months.

Talip Kucukcan, an academic and ruling AK Party MP, said Turkey was going through a rough period and moves made under the state of emergency were necessary for the country to normalise.

“Turkey is facing the aftermath of a coup attempt, and frequent terror attacks by ISIL and the PKK. A country, that has lost more than 500 soldiers and hundreds of its citizens in a short time cannot tolerate individuals, organisations, and media outlets praising the culprits of these crimes,” Kucukcan told Al Jazeera.

Rights groups and some of Ankara’s Western allies have expressed concerns about the crackdown on opposition groups and media in the country, despite their denunciation of the coup attempt.

But Kucukcan rejected the criticism.

“[The] AK party is a political movement that has been increasing its votes since it came to power in 2002. Therefore, it is irrational to think that the party is silencing the opposition in Turkey,” he said.

Tens of thousands of people in the military, civil service, police, judiciary and universities have been sacked, suspended, or arrested for alleged links to the failed putsch. 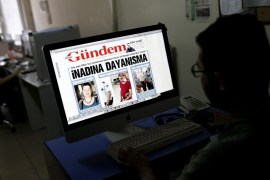