The United States has suspended talks with Russia over the war in Syria and accused Moscow of not living up to its commitments under a ceasefire agreement.

After weeks of intense air raids on Aleppo carried out by the Syrian and Russian armies, US Secretary of State John Kerry said the US was “on the verge” of ending talks on Syria with Russia.

The US government released a statement on Monday confirming the suspension of talks.

“The United States is suspending its participation in bilateral channels with Russia that were established to sustain the cessation of hostilities,” US State Department spokesperson John Kirby said in the statement.

The announcement came hours after Russian President Vladimir Putin signed a decree to suspend an agreement with the US on disposing of weapons-grade plutonium, citing “unfriendly acts” by the US.

Russia’s foreign ministry said it regretted the US decision to suspend the talks, saying Washington was trying to shift responsibility for a failure to stop the violence onto Moscow.

“After failing to fulfil the agreements that they themselves worked out, they are trying to shift responsibility on to someone else”.

Zakharova insisted that “in the past few days” Russia had “taken efforts aimed at fulfiling” the ceasefire deal, after it unravelled in acrimony.

“It all essentially came down to a simple question – who are Jabhat al-Nusra, who is behind them, and why can’t Washington fulfil its promise to divide the terrorists from the so-called moderate opposition,” she said, referring to the group now calling itself Jabhat Fateh al-Sham.

Confirmation that the US-Russian talks on Syria have collapsed suggests there is little hope, if any, of a diplomatic solution to end the five-and-a-half-year-old civil war emerging anytime soon.

News of the suspending of talks, however, came as diplomats said the United Nations Security Council would begin to negotiate on Monday a draft resolution that urges Russia and the US to ensure an immediate truce in Aleppo.

On the ground in war-torn Syria, at least seven people in Aleppo were killed when the biggest hospital in the rebel-held east was hit by the third air strike in a week.

The medical facility, known as M10, is “completely destroyed … It is gone”, said Adham Sahloul of the Syrian American Medical Society on Monday, adding that three maintenance workers had been killed.

The attack killed another four people outside the hospital, Dr Abu al-Izz said.

The repeated attacks on hospitals in rebel-held Aleppo have drawn condemnation from the UN – and accusations of war crimes.

Al-Izz and Ibrahim al-Hajj of the White Helmets rescue organisation in eastern Aleppo said the hospital had been hit by a “bunker-buster” bomb – designed to demolish below-ground facilities – which, they said, are dropped by Russian planes.

Russia intervened in Syria a year ago to prop up President Bashar al-Assad’s stumbling army.

Its air campaign has allowed government forces to reclaim territory from rebels and the Islamic State of Iraq and the Levant (ISIL, also known as ISIS), most notably imposing a siege on eastern Aleppo where some 250,000 to 300,000 civilians are now trapped.

Meanwhile, a relief group and Syrian opposition monitors said air strikes put out of service one of the country’s most secure hospitals, which had been dug into a mountain.

The International Union of Medical Care and Relief Organizations (UOSSM) said on Monday the Dr Hasan Al-Araj Hospital in Hama province was struck twice on Sunday.

The Britain-based monitoring group Syrian Observatory for Human Rights said on Monday that Russian fighter jets carried out the attacks, which hit the hospital near the central village of Kfar Zeita.

UOSSM said there were minor injuries from the attack. Syrian and Russia jets have been blamed for a series of attacks that have damaged hospitals and clinics in rebel-held parts of Syria, mostly in Aleppo. 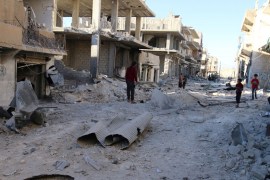 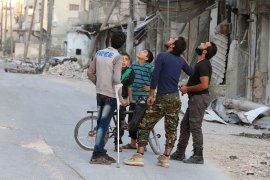