Afghan forces say they have regained control of Kunduz city centre from the Taliban, but heavy fighting continued in and around the provincial capital for a second day.

Mohammad Qasim Jangalbagh, Kunduz’s police chief, told the AFP news agency on Tuesday that hundreds of Taliban fighters were killed in the clashes and that the group was “cleared” from the centre of the city.

The ambitious assault on Kunduz came almost exactly a year after the Taliban briefly captured the city in one of its biggest successes in 15 years of fighting.

The attack in Kunduz, as well as Taliban gains in areas of Helmand and Uruzgan where they also threaten provincial capitals, has underlined the group’s growing strength and exposed weaknesses in the government, which is meeting foreign donors in Brussels this week to try to secure billions of dollars in extra aid.

Al Jazeera’s Jennifer Glasse, reporting from Kabul, said one major problem facing Afghan forces was that Taliban fighters had infiltrated “residential areas and in many cases homes, making it difficult to distinguish between civilians and the Taliban”.

“Witnesses say gunfire can still be heard around the city, that battles are going on from street to street as the Afghan special forces try to get the Taliban out,” Glasse said.

“They have largely put themselves in civilian areas. The Taliban do have some civilian sympathisers in Kunduz, which made their move into the city a little bit easier.”

NATO, which is backing Afghan forces in with air raids, implied in a tweet that they had the upper hand in the battles, saying the government “controls Kunduz city”.

US Pentagon spokesman Jeff Davis, though, described the situation as “fluid”.

Charles Cleveland, a spokesman for the NATO-led mission in Kabul, said in a statement: “Our Afghan partners are responding to the increased Taliban activity within the area, and US forces have multiple assets and enablers in the area to provide support.”

According to local officials, clashes continued on Tuesday in areas near the police headquarters, the governor’s compound, and the National Directorate.

Zar Gul Alimi, a provincial council member from Kunduz, said: “there is fighting going on in district 1 and district 3 of Kunduz city.”

She also said that overnight on Monday the Taliban had managed to move fighters into the compounds of the Afghan Red Crescent Society and the counter-narcotics police and that they were currently involved in gun battles with Afghan forces.

Footage posted by the Taliban on social media appeared to show fighters in Kunduz walking around empty streets, describing how they had captured army strongholds and taken prisoners.

The authenticity of the footage has not been verified.

The fighters appeared to have slipped through a defensive security line set up around Kunduz, entering the city from four directions before fighting broke out, witnesses said.

As the clashes spread, senior officials, including the provincial governor and the police chief, abandoned the city for the airport.

On Monday, Taliban fighters also stepped up attacks in different parts of Afghanistan, including in Helmand, where they are threatening the provincial capital of Lashkar Gah.

Positioned just across the Helmand river from the city centre, they took control of Nawa district to the south, killing a district police chief, officials said.

Heavy fighting also continued along the main road to Tarin Kot, the provincial capital of Uruzgan, also in the south, where a Taliban raid on September 8 sparked fears of another collapse. 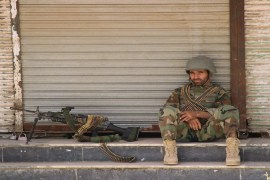 Fighters engage in battles with government forces in city that was briefly taken by the armed group a year ago. 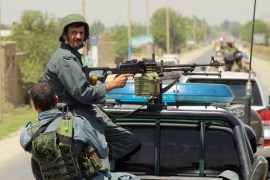